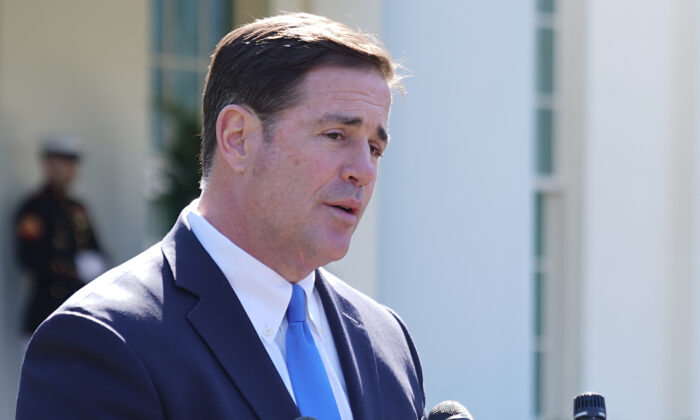 Ducey signed Senate Bill 1164 (pdf) to ban abortions after 15 weeks of pregnancy. The measure, which the legislature approved largely along party lines, sets exceptions for medical emergencies that could cause the woman to die or face “substantial impairment of a major bodily function.”

Doctors who carry out abortions beyond 15 weeks face a class 6 felony charge and if convicted could spend a year in prison and lose their license to practice medicine. Meanwhile, women who receive an abortion after 15 weeks may not be prosecuted, according to the bill.

“In Arizona, we know there is immeasurable value in every life—including preborn life,” Ducey said in a letter on March 30 (pdf). “I believe it is each state’s responsibility to protect them.”

He has signed every pro-life bill that has reached his desk since taking office in 2015.

The latest bill, sponsored by state Sen. Nancy Barto, is modeled after a Mississippi law that’s currently being considered by the U.S. Supreme Court, which is due to rule by the end of June on the law’s constitutionality.

Arizona’s abortion ban explicitly states that it doesn’t overrule a state law that has been in place for over 100 years, which would automatically outlaw abortion if the Supreme Court fully overturns its 1973 Roe v. Wade ruling. The Roe v. Wade ruling has enabled abortion up to the 24th week of pregnancy nationwide.

Senate Bill 1165 (pdf), which was also sponsored by Barto, requires all athletes at Arizona public schools and any competing private schools to participate in sports teams according to their biological sex.

“S.B. 1165 creates a statewide policy to ensure that biologically female athletes at Arizona public schools, colleges, and universities have a level playing field to compete,” Ducey said in a letter (pdf) that explained his rationale for signing the bills. “Every young Arizona athlete should have the opportunity to participate in extracurricular activities that give them a sense of belonging and allow them to grow and thrive.”

Oklahoma Gov. Kevin Stitt signed a similar measure in his state on the same day.

The measure, sponsored by state Sen. Warren Petersen, doesn’t prohibit prescriptions that those under age 18 may be taking to alter the characteristics of their biological sex, including puberty-blocking hormones or any other hormone therapy.

“The reason is simple, and common sense—this is a decision that will dramatically affect the rest of an individual’s life, including the ability of that individual to become a biological parent later in life,” Ducey said of S.B. 1138.

“Distinguishing between an adult and a child in law, as this bill does, is not unique,” the governor added. “Throughout law, children are protected from making irreversible decisions, including buying certain products or participating in activities that can have lifelong health implications. These decisions should be made when an individual reaches adulthood.”