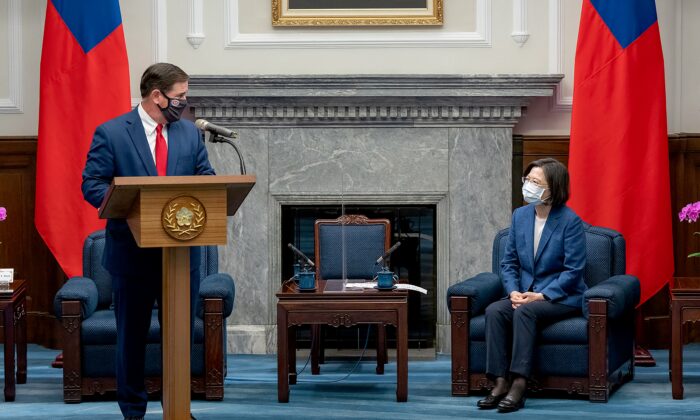 Ducey spoke during a meeting with Taiwanese President Tsai Ing-wen, in the latest of a series of visits by U.S. political leaders that have stirred the ire of the Chinese regime, which claims Taiwan as its own territory despite Taiwan being a de facto independent country, with its own military, democratically-elected government, and constitution.

Taiwan is a leader in the production of semiconductors, the critical chips that are used in everyday electronics and have become a battleground in the technology competition between the United States and China.

Arizona is also home to a base that trains Taiwan’s F-16 fighter pilots who are a major part in the island’s defenses against a threatened CCP blockade or invasion. Arizona also plans to open a state representative office in Taipei and the sides have inked an agreement on cooperation in higher education. The TSMC investment is expected to create 2,000 jobs in Arizona, with the company taking numerous future workers for training in Taiwan.

“Both Arizona and Taiwan are global semiconductor leaders and it is in this industry where our partnership is the greatest. (The investment) has elevated the potential of what’s possible between Arizona and Taiwan,” the governor said.

Neither Tsai or Ducey directly mentioned China, although in her remarks, the president indicated current events were driving expanded economic links between the sides.

“In the face of authoritarian expansionism and the economic challenges of the post-pandemic era, Taiwan seeks to bolster cooperation with the United States in the semiconductor and other high-tech industries,” Tsai said.

“This would help build more secure and more resilient supply chains. We look forward to jointly producing democracy chips to safeguard the interests of our democratic partners and create greater prosperity,” she said.

Close links between Taiwan and Arizona date back to the state’s former senators Barry Goldwater and John McCain, who were strongly critical of the CCP.

U.S. House Speaker Nancy Pelosi’s trip to Taiwan early last month made her the highest-ranking American official to visit in 25 years, prompting the CCP to launch missiles over the island and send ships and planes across the midline of the Taiwan Strait.

The United States recently sent a pair of missile cruisers through the 180 kilometer (110 mile)-wide strait in a rejection of the CCP’s protests. Despite the lack of formal diplomatic relations, the United States remains Taiwan’s main source of political and military support and federal law requires it to ensure the island has the ability to defend itself against the CCP’s threats.