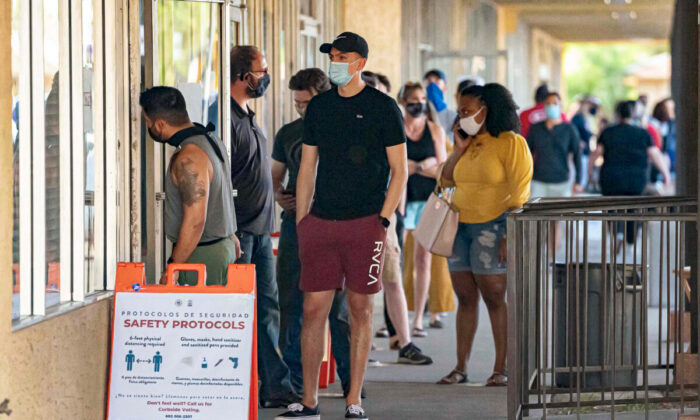 People wait in line to vote at a polling place at the Scottsdale Plaza Shopping Center, in Scottsdale, Ariz., on Nov. 3, 2020. (Olivier Touron/AFP via Getty Images)
Election Integrity

Arizona’s governor on Thursday signed into law a bill that aims to strengthen election integrity with new requirements to ensure only U.S. citizens vote in elections held in Arizona.

The measure, House Bill 2492, requires voters in Arizona to provide proof of citizenship and residency to be eligible to vote.

Under the new law, if county recorders are found to have knowingly accepted a voter registration application that doesn’t have enough proof of citizenship, they face a class 6 felony.

“Election integrity means counting every lawful vote and prohibiting any attempt to illegally cast a vote,” Gov. Doug Ducey said in a letter (pdf) to Secretary of State Katie Hobbs explaining his support for the legislation. He said the bill “is a balanced approach that honors Arizona’s history of making voting accessible without sacrificing security in our elections.”

In Arizona, the Republican Party controls the governorship and both chambers of the state’s legislature. The bill passed the legislature on March 23.

Hobbs, a Democrat who is running for governor of Arizona, told Ducey to veto the bill after lawmakers passed the measure. She said on Twitter on March 23 that the GOP-backed bill “creates new, unnecessary barriers for people registering to vote.”

Other state Democrats say the measure is part of an effort to suppress voting in the battleground state.

State Rep. Jake Hoffman, the bill’s sponsor, said the signing into law of HB 2492 is “a giant step toward ensuring elections are easy, convenient, and secure in our state.”

“HB 2492 is an incredibly well-crafted piece of legislation that is on sound legal footing and broadly supported by voters of all political parties. I am confident that should Democrats challenge HB 2492 in court it will only serve to further reinforce its clear constitutionality,” he said in a statement (pdf) Thursday.

Ducey noted in his letter to Hobbs, “Federal law prohibits non-citizens from voting in federal elections. Arizona law prohibits non-citizens from voting for all state and local offices, and requires proof of citizenship. H.B. 2492 provides clarity to Arizona law on how officials process federal form voter registration applications that lack evidence of citizenship.”

The Supreme Court ruled in 2013 (pdf) that Arizona could continue requiring proof of citizenship in its state elections, but must accept federal forms to register Arizona voters for federal elections.

The federal forms ask voters to state that they are U.S. citizens but don’t require proof of citizenship. These voters, referred to as Federal Only Voters because they are only eligible for casting a vote in federal elections, will now be required under H.B. 2492 to provide proof of citizenship in order to vote in presidential elections or vote by mail. They could still vote in congressional elections at the polls, however.

Ducey said there’s been a growing number of registrants who have used the federal form since 2014. He said 21 voters statewide used that form to register to vote in the primary election in 2014, but by the 2020 general election, there were more than 11,600 federal-only voters in Arizona who voted without providing proof of citizenship.

“In Maricopa County alone, there are currently 13,042 active registered voters who have not provided evidence of citizenship to vote through use of the federal form,” according to Ducey’s office.

Currently, there are about 31,500 federal-only voters in Arizona.

Ducey acknowledged that in 2004, when Arizona passed Proposition 200, which required proof of citizenship to vote, the requirement exempted people who were already registered to vote before the proposition’s passage. Ducey told Hobbs that H.B. 2492 “does not disturb the safe harbor granted to Arizona voters who registered to vote prior to Prop 200’s passage.”

The new law also requires Arizona’s secretary of state and each county recorder to provide the Arizona attorney general details of all people who registered to vote but didn’t give enough proof of citizenship, so the AG has enough information to check whether a person who registered with the federal form is a non-citizen.