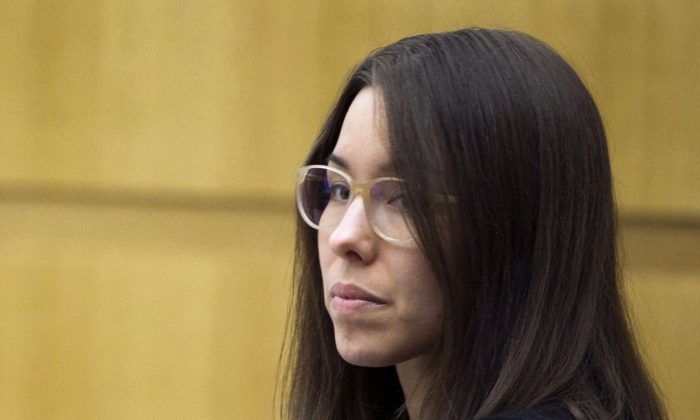 Arizona Court Agrees to Look at Jodi Arias Case, Conviction Could Be Overturned

The Arizona Court of Appeals has agreed to consider appeals filed in the murder conviction of Jodi Arias, the woman who was sentenced in 2015 for the killing of her ex-boyfriend, it was reported.

Arias was sentenced to life in prison for the slaying of Travis Alexander in 2008.

The Maricopa County Attorney’s Office (MCAO) said that two different items are being considered, including allegations of misconduct against Maricopa County prosecutor Juan Martinez, according to AZCentral, which reported that her conviction might be overturned as a result.

“In one, there is the criminal conviction and life sentence in the Arias case that … is currently being considered by the Court of Appeals,” prosecutors said in a statement to ABC15.

“This also involves claims of prosecutorial misconduct that allegedly occurred during the Arias trial,” the officials continued. “These separately are being reviewed as part of complaints submitted to the Arizona State Bar. Additionally, the internal matter involving sexual harassment of MCAO employees has already resulted in an investigation, which was fully concluded and resulted in discipline.”

According to an ABC15 report in August, Martinez was allegedly having a relationship with a blogger who was covering Arias’s trial.

Maricopa County Attorney’s Office spokeswoman Amanda Steele drew a line by saying the issues of misconduct raised by Arias in her appeal of the conviction and ethics violations being investigated by the State Bar of Arizona are separate, AZCentral reported.

“Given the Arizona Bar proceedings involving Mr. Martinez, I felt it was important to assign him a caseload that would be more flexible and allow him to take time when needed to focus on resolving these complaints,” a statement from Chief Deputy Rachel Mitchell said.

However, Karen Clark, Arias’s attorney in the ethics case, said the criminal case and the disciplinary case involving Martinez appear to be converging.

“It appears that the court of appeals has focused on the issue of prosecutorial misconduct by Juan Martinez,” Clark told AZCentral last week. “It’s appropriate … I’m encouraged that the court is focusing on his misconduct because the record supports it.”