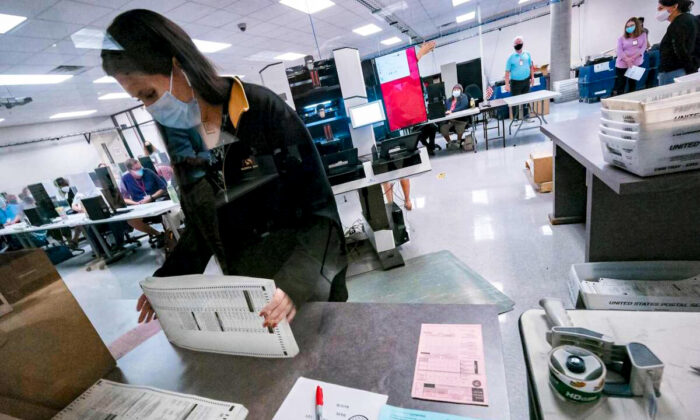 Officials in Pinal County, Arizona, said there was a shortage of ballots at more than 20 voting sites during the primary election this week, which left some voters without the ability to cast votes.

On Tuesday evening, Pinal County’s election agency confirmed the shortage and suggested that people use an “express vote device” instead.

“Due to unprecedented demand for in-person ballots, Pinal County has experienced a ballot shortage in certain, limited precincts. Pinal County is continuing to print additional ballots and distributing them to each affected precinct polling place,” county officials wrote in a Twitter post.

It later added that “you can choose to use the express vote device located at the polling place, or as long as you are physically in line at 7:00 pm today, you will be permitted to cast a ballot,” noting that people who arrive after 7 p.m. “are not permitted” to vote.

“Pinal County is continuing to print additional ballots and distributing them to each affected precinct polling place,” the election office said.

Pinal County Attorney Kent Volkmer and Jeffrey McClure, chair of the Board of Supervisors, issued a joint statement to FOX10 saying it was a “major screw-up” but McClure claimed he has “not seen evidence of a nefarious act.” Instead, he termed the shortage as “mistakes made on a grand scale.”

“We’re all human. We’ve all screwed up. There’s nothing sinister. It wasn’t as if we said, ‘Hey, this is only going to impact a Republican, or this is only going to impact a Democrat.’ This was widespread, it was equal opportunity, it was just simply a mistake,” Volkmer said during a news conference a day later, adding that about 750 out of 50,000 voters may have been affected.

“Quite frankly, we underestimated” the number of people wanting to show up in person, Volkmer asserted. “There were more people who showed up than we thought were going to show up.”

Elaborating on the ballot fracas, McClure said officials on Tuesday “opened the boxes” and “there weren’t enough ballots.”

“We’re not really quite clear how that occurred,” he said in a Wednesday news conference.

But the incident is drawing the scrutiny of national Republican organizations, including the Republican National Committee and its chairwoman, Ronna McDaniel.

“During Arizona’s primary elections, the RNC and Republican Party of Arizona’s poll observer program documented and reported multiple failures by Pinal County’s Elections Administrator, including 63,000 mail-in ballots delivered to the wrong voters and multiple Republican-heavy precinct locations running out of ballots,” McDaniel said in a statement.

“This is a comprehensive failure that disenfranchises Arizonans and exemplifies why Republican-led efforts for transparency at the ballot box are so important. Pinal County Elections Director David Frisk should resign immediately.”

Republican state Rep. John Fillmore said that such errors will further imperil voters’ faith in the electoral system amid widespread allegations of fraud after the 2020 election.

“Why the hell was the county not prepared for people showing up at the polls,” Fillmore said at a news conference this week, reported local media. “There has to be a change in the administration, in the people running the elections.”