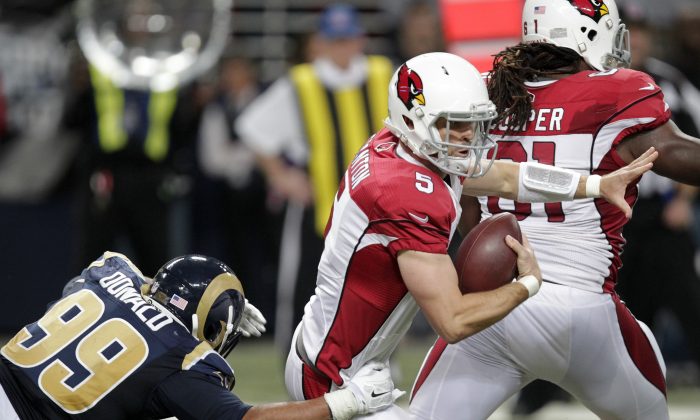 The Arizona Cardinals will play the Seattle Seahawks in Glendale on Sunday night. Here’s some of the latest updates:

“We feel he definitely has a chance to be back this season,” the coach said. “We just don’t know when.”

Asked if there was any chance Stanton could play in the next game, a crucial NFC West showdown against Seattle on Dec. 21, Arians said, “I wouldn’t put it past him but I would be surprised.”

He would not specify what the injury is but multiple reports said Stanton has a sprained knee.

“I’ll just sit down and think about which one I want,” Arians said.

Lindley finished the game after Stanton was hurt in the third quarter of Thursday night’s 12-6 win at St. Louis, a victory that virtually guaranteed Arizona a spot in the playoffs.

Lindley, the fourth quarterback to play for the Cardinals this season, was the No. 3 quarterback for Arizona last season but was released in favor of Thomas at the end of this preseason. The Cardinals signed him off the San Diego practice squad after starter Carson Palmer went down with a season-ending knee injury, also against the Rams, on Nov. 9.

Arians said Lindley had “the poise and confidence I knew he would have” after he went in against St. Louis.

Stanton could be back in 1 month

Drew Stanton might be able to play within a month–just in time for the postseason.

He could return in “about four weeks,” the source added.

Stanton is now “week-to-week,” the team has said, with another medical source saying “everybody is different.”

Ex-Rams and Cardinals QB Kurt Warner shot down rumors that he should come out of retirement to play.

“How can I think about a comeback – charity events, parades, cheer comps & flag fball tourney – I can’t even find time 2 pick up a ball!” he wrote on Saturday.

But Warner said that he considered coming back.

“I tell you what. It’s funny. I’ve actually thought about it,” he told NFL.com. “Because you guys, we talked about it at the game, is how bad I felt for the Arizona Cardinals and if they lost their quarterback again, that I actually contemplated.”

He added: “But in the green room, I kept coming back to the fact that the last time I played I was already old and slow and now I’m just older and slower and how crazy and stupid that would be to even consider that I could actually.”

Denver, New England and Indianapolis all clinched division titles with victories Sunday, while Arizona earned a playoff berth without even playing.

The Cardinals, who beat St. Louis 12-6 on Thursday night, earned their first playoff spot since the 2009 season when the Dallas-Philadelphia game Sunday night didn’t end in a tie. The Cowboys won 38-27.

The Broncos won the AFC West for the fourth straight year with a 22-10 victory at San Diego.

Tom Brady and the Patriots beat Miami 41-13 to win the AFC East for the sixth consecutive year and become the first team in NFL history with 11 division titles in 12 years.

The Colts held off the Houston Texans 17-10 to clinch the AFC South title and a third consecutive playoff appearance.