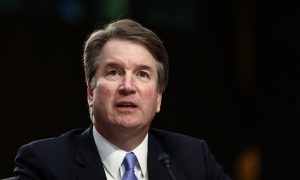 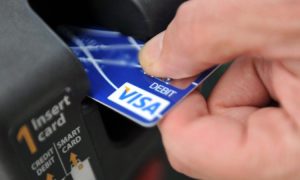 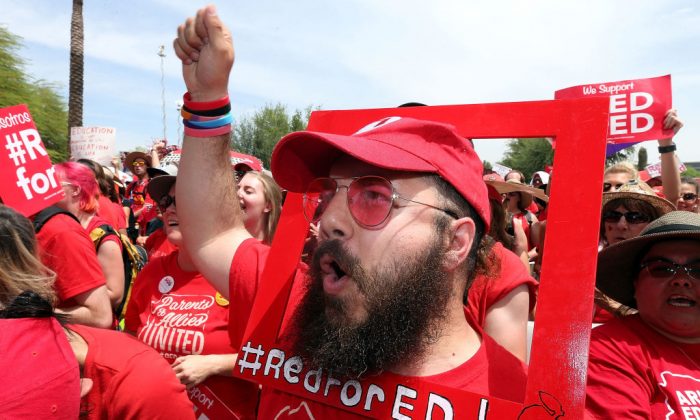 Aude Odeh, an english teacher at Barry Goldwater High School, cheers in support of the #REDforED movement during a rally in front of the State Capitol in Phoenix, Arizona on April 26, 2018. (Ralph Freso/Getty Images)
Politics

Arizona Bill Would Forbid Teachers From Talking Politics and Religion

A proposed bill in Arizona would ban teachers from discussing politics in the classroom.

If teachers ignored the ban, they could be fired.

The bill states that the Arizona Board of Education should adopt rules providing for an educator code of ethics.

Along with political messages, the proposed ethics code in the bill would also forbid the spread of religious messages.

Teachers would be banned from endorsing, supporting, or opposing any legislation, rule, or regulation, whether pending, proposed, or enacted.

The ban would include federal, state, and local rules.

If a controversial issue arises during the teaching of a subject, teachers would have to provide students with materials supporting both sides and present those views “in a fair-minded and nonpartisan manner,” according to the legislation.

Teachers would also be forbidden from segregating students according to race or single out one racial group as being responsible for the suffering experienced by another racial group.

The bill was introduced by Rep. Mark Finchem, a Republican.

Marisol Garcia, vice president of the Arizona Education Association, the state teachers’ union, called the bill a stunt. “It’s disappointing that a legislator would choose to do this at the beginning of the session,” she told the Arizona Republic.

Noah Karvelis, a Red For Ed organizer and elementary music teacher, also slammed the bill, saying it was redundant and addressed a problem that didn’t exist.

“It seems to be the same regulations that we have really always followed,” Karvelis told ABC 15. “We don’t have teachers who are in their pushing ideologies on students in the way that I think people maybe are imagining.”

Red for Ed is a campaign to get more funding for teachers and schools and has included teacher strikes.

Finchem said that the legislation stemmed from conversations he had with a number of upset parents who had called him.

In one case, a math teacher frequently bashed President Donald Trump, one parent told him. Another parent told him their 6-year-old child came home crying because students were told they had to wear a red shirt to support their teacher.

“I’m sure that the vast majority of teachers don’t participate in promoting political ideology,” he said. “It only takes one or two people to give an entire profession a bad name.”

State law already prohibits teachers and anyone else employed by a school or school district from using public resources to influence the outcome of an election, but Finchem said the conversations showed him that a code of ethics was necessary.

“If you step into a classroom with a Trump T-shirt, a Hillary T-shirt, a ‘Vote No on 126’ T-shirt, you’re engaging in political speech in the classroom,” Finchem said. “If there’s a political agenda behind it, leave it at home. Simple request.”