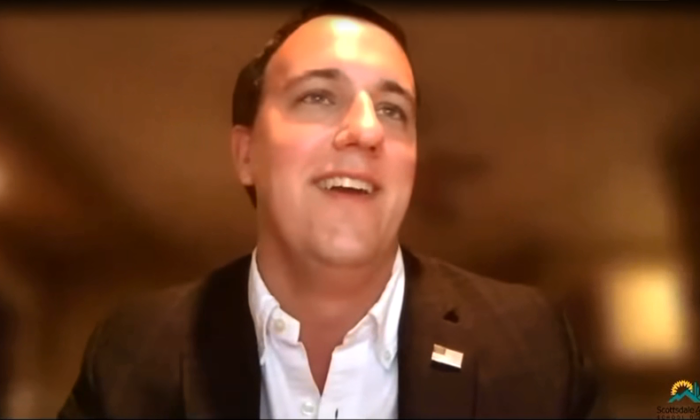 Screenshot from virtual meeting where Jann-Michael Greenburg admits to using the name "Mark Greenburg" when on his computer. (Patricia Tolson/The Epoch Times)
US

Arizona Attorney General Mark Brnovich is taking legal action against the Scottsdale Unified School District (SUSD) Governing Board and its former president, claiming they violated the state’s open meeting law by restricting public comments on a mask-mandate proposal in August 2021.

The lawsuit accuses the board and then-president Jann-Michael Greenburg of “knowingly applying unauthorized content-based restrictions on public comment” made during a board meeting on April 17, 2021, and “knowingly cutting off or otherwise interrupting speakers during a call to the public.”

According to the suit, on Aug. 17 the SUSD board held a virtual meeting to discuss the district’s instructional time model for 2021-22 and whether to require masks for students and staff. The board decided to discuss both topics separately.

At the end of the meeting, Greenburg informed the public he would terminate any comment that he “deemed to stray too far” from the instructional time model discussion.

By doing this, the suit claims the board imposed content restrictions on the public, a violation of state open meeting law.

On Aug. 23, 2021, the board held another public meeting on the proposed instructional time model. The suit claims only two public members offered comments, likely because of the content restrictions.

The AG’s office received complaints about how the board conducted both meetings after the Aug. 23 meeting.

“By applying content-based restrictions, including about a proposed mask mandate, the board did not hold an ‘open call to the public body,’ “ the suit states.

It alleges the board “purposely bifurcated the agenda for the Aug. 17, 2021 meeting to avoid allowing public comment on a proposed mask mandate and other items listed on the agenda under the ‘special meeting.’ ”

The suit contends that on Aug. 24, 2021, Greenburg violated the open meeting law by interrupting a public member during public comment who voiced concern that the district was making “inappropriate materials” available to students.

“Greenburg interrupted the parent’s comments to claim that the comments were not true and to attempt to explain why. The parent correctly explained to Greenburg that he is not permitted to interrupt public comments,” the suit states.

The suit references a video in which Greenburg concluded his remarks with, “Jesus [expletive] Christ people!”

Based on these actions, the suit requests the court prohibit the district from using public funds to provide legal services for Greenburg.

It seeks in addition to impose a civil penalty on Greenburg “in the maximum amount allowed under the law,” and an order containing “appropriate measures to prevent further violations of the open meeting law or removing Greenburg from office.”

However, Greenburg’s legal troubles don’t end with the AG’s filing.

On May 5, three parents in the SUSD filed a lawsuit claiming Greenburg kept an electronic dossier on them that they believe violated their constitutional rights.

The suit alleges Greenburg kept “reams” of public and private information on the parents and outspoken critics of the proposed mask mandate.

Greenburg’s father, Mark Greenburg, and his wife, Dagmar Greenburg, are also named in the suit.

In November 2021, the board demoted Jann-Michael to board member in connection with the Google Drive dossier.

Greenburg and current board president Julie Cieniawski could not immediately be reached for comment.