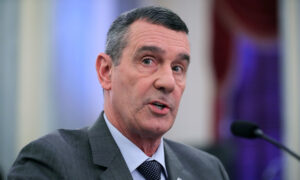 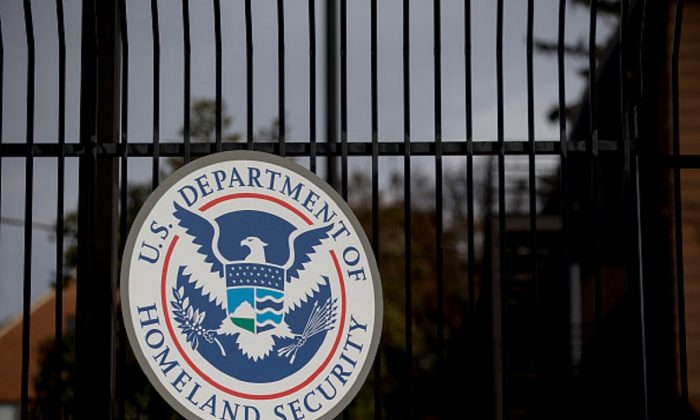 The U.S. Department of Homeland Security (DHS) seal hangs on a fence at the agency's headquarters in Washington, on Dec. 11, 2014. (Andrew Harrer/Bloomberg via Getty Images)
Policy

Arizona Attorney General Mark Brnovich filed a lawsuit against the Department of Homeland Security (DHS) on Feb. 3 over a memo from the Biden administration that ordered a freeze on the majority of deportations for 100 days.

The DHS released the memo on Jan. 20 (pdf) that imposed the moratorium on most deportations and outlined categories of immigration offenders who will continue to be subject to arrest and eventual removal, including those who pose a national security risk or are suspected of terrorism or espionage.

Brnovich, a Republican, announced the lawsuit on Twitter late on Feb. 3, stating that he believes the policy “puts Arizona public safety at risk.”

“The 100-Day Pause on Deportations includes those charged with or convicted of a crime,” Brnovich said. “Law enforcement officials have told our office they are concerned about whether released individuals are being tested for COVID-19.”

Our office filed a lawsuit against DHS and federal officials over a policy that puts Arizona public safety at risk. The 100-Day Pause on Deportations includes those charged with or convicted of a crime.https://t.co/fCJpMGhn0Z (1/3) pic.twitter.com/16t0QG8Fz9

The attorney general said the lawsuit asks the U.S. District Court in Arizona to rule that the 100-Day Pause policy violates federal law.

Arizona is the second state to file suit over the deportation moratorium, which was announced on President Joe Biden’s first day in office.

The Biden administration has failed “to provide any concrete, reasonable justification for a 100-day pause on deportations,” Tipton said in his order.

“It’s really a straightforward lawsuit,” Brnovich told KTAR News radio. “We basically sued the Department of Homeland Security alleging that their new policy halting deportations is illegal and it’s also contrary to an MOU [memorandum of understanding] that we have with Homeland Security.”

Similar to Texas, Arizona bases part of its argument on an agreement reached by the Trump administration between DHS and other states and localities in the final weeks of the former president’s administration. The deal states the department won’t make changes to immigration enforcement without first consulting states and allowing them to comment.

According to data published Jan. 29 by Immigration and Customs Enforcement following the Texas lawsuit, the agency had released 176 immigrants with final orders of removal from Jan. 22 to Jan. 25—the period the deportations freeze was in effect.

“It is unconscionable for DHS to release potentially dangerous detainees into our state, especially when no efforts are made to coordinate with applicable courts and probation departments. I am asking the court to enforce the law,” Brnovich said in a statement.

“Arizona, as a border state, will be directly impacted by Defendants’ decision to flout their legal obligations,” Brnovich’s lawsuit states. “Arizona’s law enforcement community is particularly concerned that aliens who have been charged or convicted of crimes will be released as a result of DHS’s 100-day moratorium.”

The attorney general added on Twitter that while he backs the need for “comprehensive immigration reform,” he doesn’t believe it can be achieved through “unsafe and untenable executive orders.”