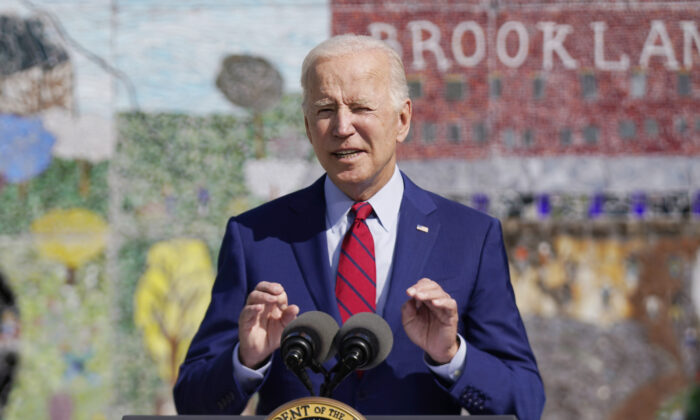 Arizona filed a lawsuit against the Biden administration’s sweeping COVID-19 vaccine mandates that affect federal employees, most healthcare workers, and employees at numerous private businesses—likely the first lawsuit that was filed against the policies.

“The federal government cannot force people to get the COVID-19 vaccine. The Biden Administration is once again flouting our laws and precedents to push their radical agenda,” Attorney General Mark Brnovich, a Republican, said in a statement on Tuesday.

In a lawsuit that was filed in the U.S. District Court of Arizona, Brnovich’s team contrasted the new mandates against the lack of COVID-19 vaccine rules for illegal immigrants who enter via the U.S.-Mexico border, where there has been a surge in encounters since Biden took office.

Biden last week made the announcement regarding vaccine mandates for private businesses with 100 or more employees, all federal employees and contractors, and healthcare workers at facilities that receive Medicare and Medicaid funding. The private employees can either get the COVID-19 vaccine or submit to weekly testing, according to the White House plan.

“Many of us are frustrated with the nearly 80 million Americans who are still not vaccinated, even though the vaccine is safe, effective, and free,” Biden said in a speech last week, explaining why the mandates are necessary.

But the Arizona lawsuit argued that Biden’s plan violates the Equal Protection Clause by allegedly favoring illegal aliens who have entered the United States over U.S. citizens.

“Although the precise contours of the federal vaccination mandates are not yet clear, the violation of the Equal Protection Clause is already evident and egregious,” the brief stated. “In a nutshell: unauthorized aliens will not be subject to any vaccination requirements even when released directly into the United States (where most will remain), while roughly a hundred million U.S. citizens will be subject to unprecedented vaccination requirements.”

As a result, Brnovich’s team argued, the administration’s policies display an “unmistakable” and “unconstitutional” bias “in favor of unauthorized aliens.”

Meanwhile, the suit also cites a Twitter post from an MSNBC contributor, Stephanie Ruhle, that was shared by White House chief of staff Ron Klain on Sept. 9 that Biden’s order targeting private businesses was the “ultimate work-around” for the federal government to mandate vaccines.

“The inadvertent admission in the preceding paragraph makes all of the administration’s actions constitutionally suspect,” Brnovich’s suit said. “These other violations will be the subject of future challenges.”

The lawsuit asks the court to declare unconstitutional the administration’s allegedly discriminatory vaccine policies regarding illegal aliens and U.S. citizens as well as permanent residents. It also seeks an injunction against the White House implementing the mandate, arguing that any vaccine requirement for citizens and permanent residents should be applied to illegal aliens.

Other Republican attorney generals and governors have said they would file lawsuits against the Biden administration after the mandate was announced.

The Epoch Times has contacted the White House and the Department of Homeland Security for comment.