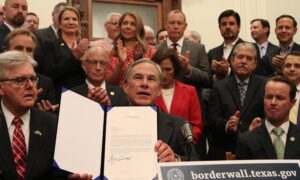 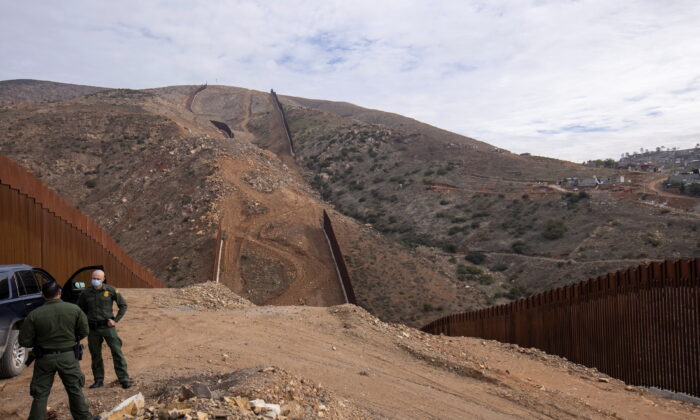 Border patrol agents stand near the location of halted construction along the U.S. Border wall with Mexico as an unfinished section is shown on Otay Mountain, east of San Diego, Calif., on Feb. 2, 2021. (Mike Blake/Reuters)
Immigration & Border Security

“There is no doubt that the Biden Administration’s immigration policies are causing a humanitarian, public safety, and environmental crisis at our border,” Brnovich said in a statement. “I will do everything I can to stop their destructive actions and protect Arizona.”

In April, Brnovich filed a lawsuit against Department of Homeland Security (DHS) officials, alleging that the halt of border wall construction and the MPP policy violated the National Environmental Policy Act, which requires federal agencies like the DHS to weigh environmental considerations before taking any significant federal action.

The latest lawsuit amended Brnovich’s previous lawsuit with some new claims, including that the administration’s refusal to expend funds allocated by Congress to wall construction violates both the Constitution and the Impoundment Control Act of 1974, and that the administration has failed to prepare a programmatic environmental impact statement for a policy which will have significant environmental impacts.

The lawsuit also called the Biden administration’s decisions “both arbitrary and capricious.”

The Epoch Times has contacted DHS for comment about the lawsuit.

President Joe Biden halted the construction of the border wall on his first day in office. Days later, he ordered the DHS to suspend the MPP policy, which has since been officially terminated.

Monday’s lawsuit also includes a motion for a preliminary injunction, which asks the court to invalidate the terminations of border wall contracts and to substantially reinstate the MPP policy until a proper environmental analysis is conducted.

The complaint (pdf) claims that Biden’s termination of border wall construction and MPP “played a major role in causing this sudden influx of migrants.” In May, the U.S. Customs and Border Protection encountered 180,034 migrants along the southwest border.

The Arizona Department of Environmental Quality “estimates that each border-crosser leaves an average of six to eight pounds of trash behind,” the complaint noted.

The complaint pointed out that border-crossers will damage the vegetation and wildlife, harm the endangered species, and impact natural resources, particularly water. Sickness and mortality to the migrants themselves from dangerous border crossings is also one of the environmental impacts.

Texas Gov. Greg Abbott announced last month that his state will build its own barrier along its 1,200-mile border with Mexico.

Monday’s lawsuit was filed in a federal court in the District of Arizona.