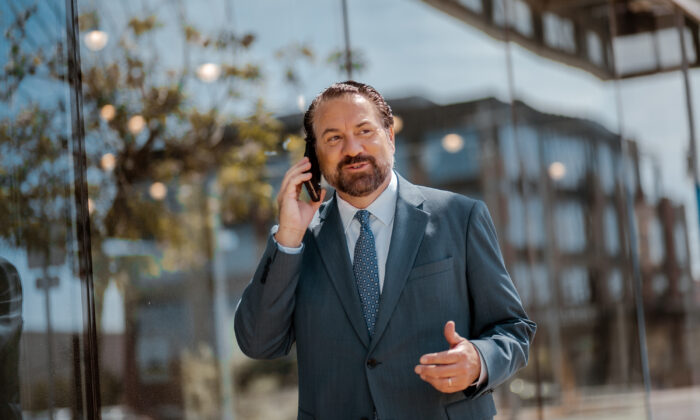 Arizona Attorney General Mark Brnovich, a Republican candidate in the Aug. 2 primary for U.S. Senate, in an undated photo. (Courtesy of Brnovich for Senate)
2022 Midterm Elections

Former President Donald Trump has been trying, unsuccessfully, to block unauthorized use of his name, image, and likeness, especially in campaign fundraising communications, according to recent reports.

Because Trump is legally considered a “public figure,” the practice will be difficult to stop, an attorney with expertise in that area of law told The Epoch Times.

But candidates who’ve used Trump’s name or image without permission could face “ugly” legal challenges for other reasons, according to Florida attorney Jeff Childers, a specialist in commercial and business law. Donors could claim fraud if a supposed Trump connection prompted their giving, he said.

Trump’s efforts to stop others from cashing in on his name made headlines on July 4 over a legal tussle with Arizona Attorney General Mark Brnovich. Brnovich is running for the U.S. Senate in the hopes of unseating incumbent Sen. Mark Kelly (D-Ariz.).

The media outlet noted an example in which the PAC lawyer referred to a recent email from the Brnovich campaign with the subject line “Account Termination Notice.”

The email told recipients they would lose the “chance of continuing to receive our Trump polls, Trump rally alerts, and 2024 endorsement opportunities” if they didn’t donate to Brnovich’s Senate campaign.

“Your use of President Trump’s name, image, and/or likeness is likely to deceive individuals into believing [former] president Trump supports, endorses, or otherwise promotes your candidacy for U.S. Senate in Arizona—he does not,” the attorney wrote in the letter to Brnovich, according to the report.

In June, Trump endorsed Brnovich’s top opponent, Blake Masters, one of five Republicans on the ballot for the Aug. 2 primary. The winner will advance to face Kelly on Nov. 8.

But there’s more to the tussle than just Trump’s preference for Masters in the Senate race.

After the 2020 election results were called into question, Trump denounced Brnovich for announcing that he saw “no evidence, there are no facts that would lead anyone to believe the election results will change.”

Trump said Brnovich was a “disappointment” who, he claimed, knew the 2020 election was “rigged and stolen.”

“[Former] President Trump’s complaint about the use of his likeness is probably not strong, because political campaigns routinely use adversaries’ images in fundraising,” Childers said. “Imagine the GOP using an awkward Pelosi photo—it happens all the time.”

But if people were confused about who their donation money was going to, that could land Brnovich’s campaign into larger legal snarls.

“Brnovich is clearly misleading voters by claiming some kind of formal or informal Trump endorsement,” he said. “Brnovich should be worried about legal claims related to fraud. I can imagine, for example, a class action [lawsuit] brought by folks who donated to Brnovich’s campaign relying on his claimed Trump affiliation.

“Trump might have viable legal claims, too. Brnovich appears to be intentionally interfering with Trump’s interests while benefitting himself—or his campaign—financially. For certain, the Brnovich campaign needs to carefully consider the political cost, since what comes out in discovery is likely to be pretty ugly for them.”

Since July 8, 2021, the Brnovich for Senate campaign has spent $137,444 on Facebook ads. Many don’t involve Trump at all and instead focus on criticism of Kelly, Democrats in general, or President Joe Biden. Facebook users who click on any of the ads are directed to a fundraising site collecting donations for the campaign.

A Facebook advertisement archive shows that Brnovich began using Trump’s name and image in fundraising efforts on Nov. 2, 2021, in ads shown around the country.

The first Trump-linked requests for donations included a 10-second video showing Trump with a raised fist. Behind him was an animation of a brick wall being constructed.

One variation of the ad reads: “Let’s take back the Senate, but we need you in this fight Now! Chip in here to protect Trump’s legacy and keep America safe and secure.”

A different set of ads appeared in the news feeds of Facebook users around the country in November, showing a Trump picture emblazoned with the words: “Defend Trump’s legacy. Join the Trump Legacy Defenders Club now.”

Other versions of the ad included messages such as: “100 spots just Opened—claim yours now. President Trump is waiting on You!”

Another ad reads: “The Radical Democrats are doing everything in their power to Erase Trump’s Legacy. Don’t let them win, become a Trump Legacy Defender Now!

“President Trump’s Legacy is on the line. Can he count on you to step up and Defend Him against the Radical Democrats!?! Limited Spots Available Now! Trump Legacy Defender Club.”

The links all lead to a giving site for Brnovich.

An unmistakable silhouette of Trump from behind ran in Brnovich ads in January and February with differing messages, including: “Payment Incomplete Your Membership has not been claimed and we only have Hours left before we send President Trump an updated list of the TOP patriots who have claimed their 2022 Membership,” and “We couldn’t believe our eyes and upon further inspection, our worst fears might have just been realized. Have you Abandoned President Trump because your Trump Membership is expiring!?!”

The only image of Trump on Brnovich’s Facebook page now is an undated picture of the two men posing and smiling together. It was posted on Jan. 15 with the words, “Great to have you in Arizona, Mr. President.”

A similar image of the duo, apparently taken at the same time, appeared in a variety of Facebook ads that ran in January, February, March, and April. The ads included messages such as: “We Must take back Arizona if we want to take back the Senate. Are you going to stand with President Trump, or are you going to sit on the sidelines? If you’re going to sit out, don’t complain when we lose in 2022.”

One version reads: “Are you really going to Ignore President Trump? We thought he could count on you. This is your Last Chance to help Flip [Arizona] and Take Back The Senate.”

Ads in February and March included a picture of Trump alone with the words: “Endorse Trump for president in 2024! Join a list of Day 1 MAGA conservatives endorsing President Trump for 2024.”

Those ads asked viewers to show their support with messages such as: “Do you want President Trump to run again in 2024? Reports say he could announce a run at any moment and we aren’t sure where you stand!” and “President Trump is actively deciding another run in 2024 and this is your chance to Influence his decision! Endorse him before it’s too late! Endorse Trump for President in 2024!”

Trump’s attorneys have threatened legal action before for the unauthorized use of his name and image. In March 2021, they took aim at the Republican National Committee’s (RNC) efforts to draw support by using Trump-heavy messaging.

The Republican Party ignored the threats and has kept up a relentless barrage of donation requests in texts, emails, and ads using Trump’s name and image.

The RNC pointed out Trump’s status as a public figure and stated that using his name and image in political speech is protected by the First Amendment.

The Trump ads seem to work. From the beginning of 2021 through the end of May, the party had raised almost $233 million in contributions.

Trump’s Save America PAC also uses similar appeals with his image and name. The PAC has raised more than $98 million this election cycle and has spent $205,000 on behalf of Republican candidates, according to OpenSecrets, a nonpartisan organization that tracks money moves in U.S. politics.

Brnovich had raised $2.54 million as of March 31, according to the Federal Election Commission. He has been endorsed by radio and Fox News television personalities Sean Hannity and Mark Levin.