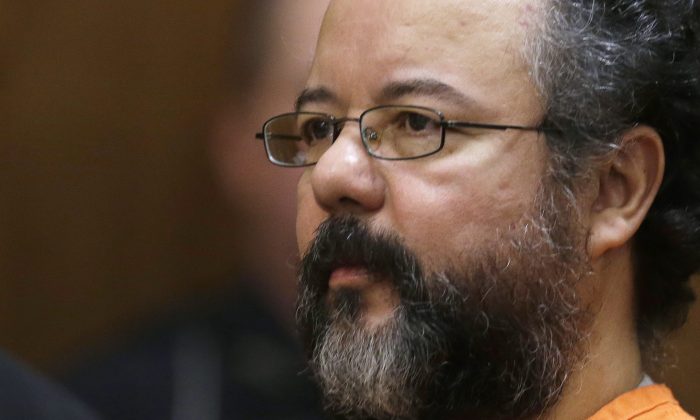 Ariel Castro listens in the courtroom during the sentencing phase Thursday, Aug. 1, 2013, in Cleveland. Three months after an Ohio woman kicked out part of a door to end nearly a decade of captivity, Castro, a onetime school bus driver faces sentencing for kidnapping three women and subjecting them to years of sexual and physical abuse. (AP Photo/Tony Dejak)
US

Ariel Castro Sentenced to Life in Jail Without Parole

Ariel Castro was sentenced to life in jail without the possibility of parole after pleading guilty to kidnapping and holding captive three young women in his Cleveland home, and to aggravated murder for killing an unborn child from one of the women.

Judge Michael Russo cited several cases, but said that they were “nothing like this.” He said the victims suffered seriously, and they showed signs of malnourishment, and underwent psychological harm.

All of the three women kidnapped had been friends with Castro’s daughters.

Castro said in his final statement that he was addicted to pornography and apologized to the victims and their families. He previously said that he was a victim of sexual abuse himself.

Castro abused the victims constantly over the years, including playing Russian roulette with them.

The women were found approximately three months ago, after a neighbor kicked down a door on the back of Castro’s home, letting one of the women out.

Castro’s own daughter grew up in a household where “doors were locked, windows were covered, people were not allowed to come over,” said the judge. “You have exposed a young child to unbelievable conditions.”

“In your mind there was harmony … I’m not sure there’s anyone in America who would agree with you.”

The women, who were kidnapped when they were young teenagers, “could not have imagined that an adult would have tricked them,” said Russo.

The freed women have all maintained private lives after being let out, apart from releasing one video several weeks ago.