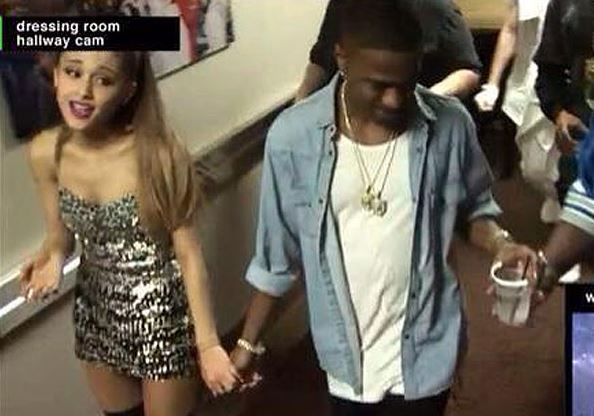 The Ariana Grande and Big Sean dating rumors reached a new high after the pair were spotted holding hands backstage at the MTV Video Music Awards, but Grande won’t confirm anything yet.

The live stream back stage showed the two singers holding hands backstage after Grande opened the show with a performance along with Nicki Minaj and Jessie J.

MTV News posted a video still of the pair holding hands. “DID YOU SEE THIS?!?” it asked fans.

The pair later collaborated on stage with the Grande song “Problem.”

Ryan Seacrest during an interview with Grande on Tuesday asked her about the rumored relationship.

“I mean, I guess, curiosity man, it’ll kill you,” she said. “I don’t know what to say, Ryan. Why are you doing this me? I’ll tell you. I’ll tell you when we’re not on the air. I trust you. I’ve known you a long time. I don’t know about these millions of people listening in right now.”

A source previously told Entertainment Online that the pair are dating.

“They have been friends since they made the song together. They have been spending more time together and recently have been getting very close. They are both doing great,” the source said.

Grande, 21, and Big Sean, 26, are both coming out of recent relationships.

Grande recently split with Jai Brooks while Big Sean split with Naya Rivera. They were engaged when they split up.