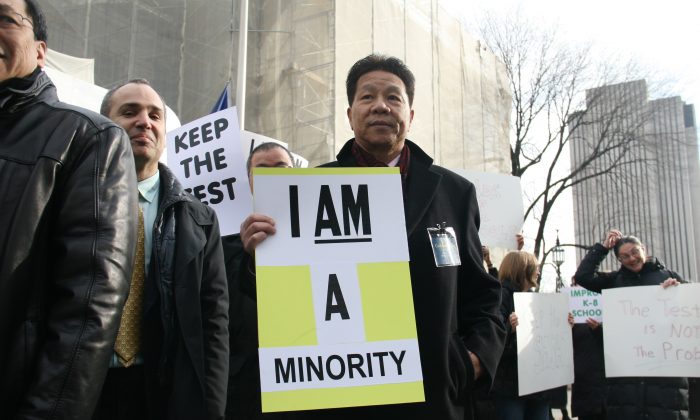 NEW YORK—Education reform advocates wrangled again Thursday with how best to patch up the public school system one step at a time. The Committee on Education reconvened to hold an oversight hearing in City Hall over three bills aimed at increasing diversity in schools, including one controversial bill that aroused a simultaneous protest on the steps.

If passed, the particular bill would open up admissions criteria to include middle school grade point averages, school attendance records, and state test scores. These new inclusions would be in addition to the current sole criterion—the Specialized High Schools Admissions Test (SHSAT).

Last year, a little over half of the eight specialized high schools’ student populations were Asian, according to the education committee’s findings. Blacks and Hispanics were offered only 12 percent of the seats at the schools.

Proponents of the bill say that the results of a single exam should not determine a student’s educational future, citing research done by the American Psychological Association and others.

But to open up the schools to students with great middle school grades and attendance, would be to introduce outside influences and ruin a perfectly objective and fair way of measurement, argued officials and alumni associations.

They gathered to tout the perks of the exam.

Assemblyman Bill Colton said that traditionally, the test has been a vehicle for low-income people to gain some measure of economic success.

“Don’t tamper with something that means so much!” said Colton, to the cheers of the crowd behind him.

Phil Gim, 62, a co-founder of CoalitionEdu, a group started by Brooklyn Tech alumni that supports the exam, used to commute four hours a day to get from Whitestone, Queens, to Fort Greene, Brooklyn, and back.

He said the Asian community is a “perpetual immigrant community” with new people arriving every year who need a ladder to more opportunities.

Gim, who is a small business owner, recalled that when he was admitted to Brooklyn Tech, back when the school was male-only, he and his family ate a little better that day to celebrate.

The lack of a proportional amount of blacks and Hispanics in specialized high schools is only one symptom of a broken system, protesters said. Rather than change the criteria for schools that produced several Nobel Peace Prize and Pulitzer Prize winners, pro-SHSAT advocates asked that other education reforms be effected.

Larry Cary, president of the Brooklyn Tech alumni foundation, explained that supporters of the test would like to see education reforms that allow blacks and Hispanics to achieve at a higher level as well.

“We are not Neanderthals opposed to diversity,” he said.

New York State Senator Toby Stavisky, who represents Queens, proudly stated that both her and her son have attended Bronx Science, and she formerly taught at Brooklyn Tech. Problems in the education system should be addressed with universal pre-k, she said.

“It’s the new Asian Exclusion Act,” said former assemblyman Michael Benjamin, who graduated from Bronx Science. He said that the number of blacks and Hispanics has remained steady over the years, while Asians are slowly outpacing whites.

Rather, the counter-argument suggests the city should invest in gifted and talented programs in other neighborhoods.

A Department of Education official testified during the oversight hearing at City Hall that city officials have been working toward increasing access to the specialized schools. The city offers enrichment programs for low-income middle schoolers, and officials have asked middle school guidance counselors to recommend the top 15 percent of their kids to sit for the test.