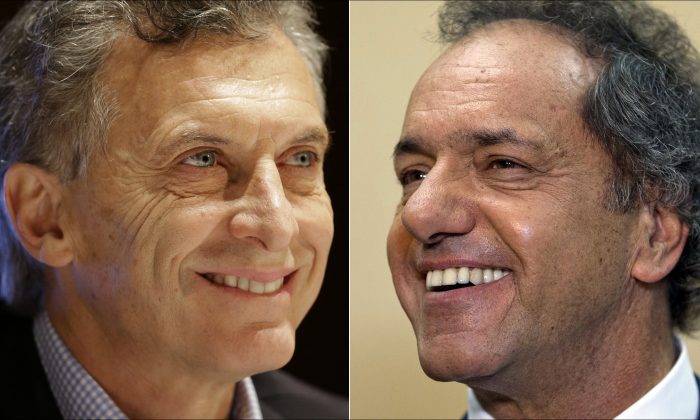 Argentines Contemplate Past Policies and Future in Election

BUENOS AIRES, Argentina—Rising crime, soaring prices and proposals to bring Latin America’s third largest economy out of a funk were some of the issues Argentines were considering during Sunday’s presidential runoff election, seen as a referendum on the left-leaning policies of polarizing President Cristina Fernandez with the potential to have ripple effects across South America.

Opposition leader Mauricio Macri, who campaigned on promises to reform and jumpstart Argentina’s economy, went in as the front-runner after his unexpectedly strong showing in the Oct. 25 first round that forced a runoff against Daniel Scioli, the president’s chosen successor.

Scioli, who had been expected to win by 10 or more points in last month’s six-candidate election, tried to regain momentum by frequently attacking Macri before the runoff. He said a Macri victory would subject this nation of 41 million people to the market-driven policies of the 1990s, a period of deregulation that many Argentines believe set the stage for the financial meltdown of 2001-2002.

“This government has helped a lot of people with the social welfare plans,” said Carlos Mercurio, a 55-year-old newsstand owner who voted for Scioli. “I’m afraid of what Macri might do.”

Macri has rejected the notion that he represents policies of the past, saying he would lead with “21st century development” as opposed to “21st century socialism”—a term used by supporters of the late Venezuelan President Hugo Chavez and his successor, Nicolas Maduro.

“The dirty campaigning against Macri has been so aggressive,” said Marcela Zamora, 42, who voted for Macri after supporting one of the other four candidates in the first round. “I just want (the ruling party) gone.”

Macri also promised to shake things up regionally. If elected, he said, he would push to expel Venezuela from the South American trade bloc known as Mercosur because of the jailing of opposition leaders under Maduro. That would be a huge change for a continent where many countries, including neighbors Chile and Brazil, have left-leaning democratic governments that have maintained close ties with Venezuela.

The election comes at a time when Argentina’s economy has stalled. Inflation is around 30 percent, gross domestic product growth is just above zero and many private economists warn that the Fernandez administration’s spending is not sustainable.

Over the course of the campaign, both candidates at times tried to straddle the center. Scioli said he would solve a long-standing New York court fight with creditors in the U.S. who Fernandez calls “vultures” and has refused to negotiate with. Macri flipped his position and voiced support for the nationalization of the YPF oil company and Aerolineas Argentina, popular actions by the Fernandez administration.

“The candidates are trying to look like each other,” said Maria Victoria Murillo, a professor of political science at Columbia University and an expert on Argentine politics.

But there were also clear differences.

Macri, the mayor of Buenos Aires, promised to lift unpopular controls on the buying of U.S. dollars and thus eliminate a booming black market for currency exchange. Doing that would likely lead to a sharp devaluation of the Argentine peso. With low foreign reserves, the government would desperately need an immediate infusion of dollars. Those could come from many different places, but ultimately would require structural changes to a largely protectionist economy, solving the debt spat and developing warmer relations with other nations, including the United States.

Scioli, governor of the large Buenos Aires province, said he would maintain energy and transportation subsidies along with the many social works programs instituted under Fernandez and Nestor Kirchner, her late husband and presidential predecessor. While such promises signaled an embrace of the status quo, Scioli also promised to make small fixes where necessary.

In the opening round, Scioli, a former boat racer who lost his right arm in competition, got 37 percent of the votes, while 34 percent went for Macri, who gained a national profile as president of the popular soccer club Boca Juniors. That close finish meant the country’s first-ever presidential runoff.