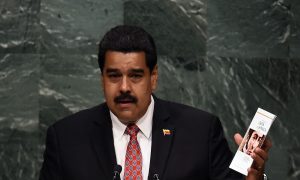 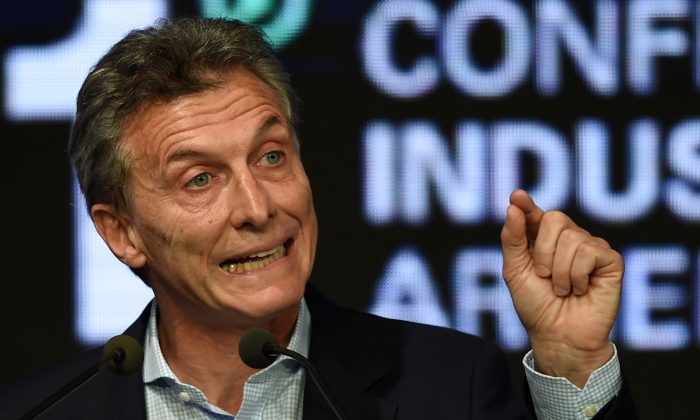 Macri made his appeal during a meeting of the Mercosur trade bloc in the Paraguayan capital. He recently said he would seek to suspend Venezuela from the South American block over its government’s jailing of opposition leaders. But that’s no longer likely because President Nicolas Maduro’s government respected the results of Venezuela’s Dec. 6 congressional elections.

Mercosur members say that the suspension would only have been in order if Venezuela had not accepted the vote results and broken the group’s so-called “democratic clause,” which says a member country can be sanctioned if it has “broken the democratic order.”

“Venezuela’s government must work toward achieving a true culture of democracy for our region,” Macri said during the meeting in Asuncion. “There’s no room for persecution based on ideological reasons or for thinking differently.”

To emphasize his commitment to the cause, Macri took a picture on the night he was elected president on Nov. 22 with Lilian Tintori, the wife of Leopoldo Lopez, an opposition leader in Venezuela jailed early last year.

Venezuela became a full member of the South American bloc in 2012 in an effort to link the region’s most powerful agricultural and energy markets.

“Macri is defending the political violence of 2014, when (opposition demonstrators) used bazookas, set the public ministry on fire,” Rodriguez said of protests last year in Venezuela, in which several dozen people died.

In a heated retort, Rodriguez also said Macri had freed criminals who were responsible for torture and murders during Argentina’s 1976-1983 military dictatorship. Argentina’s Foreign Minister Susana Malcorria later said the information provided by her Venezuelan counterpart was wrong. She said Macri has not proposed an amnesty of dictatorship-era human rights abusers or agreed to their release.

During the Mercosur meeting, Paraguay proposed reviving a protocol that would oversee that human rights are respected by its member states. The bloc’s final statement after the meeting encouraged Venezuela to join the other countries that have already signed the agreement.

The economies of the Mercosur members have been badly hit by a slowdown in China which has decreased the Asian giant’s demand for the region’s commodities. The International Monetary Fund expects that Brazil, Latin America’s largest economy, will shrink 3 percent in 2015. The IMF forecasts that Argentina will grow just 0.4 percent this year and contract 0.7 percent in 2016.

“To defend ourselves from the global economic crisis we have to strengthen our internal markets. We can guarantee the region’s economic growth through greater integration,” said Bolivian President Evo Morales.

Argentina has been criticized by Brazil and others for its protectionist policies. But Argentina’s foreign minister said Mercosur members praised her country’s recent decision to lift distortive policies such as heavy foreign exchange controls enacted by the previous administration.

Macri’s government put an end on the unpopular restrictions on buying U.S. dollars last week that made it difficult for businesses to operate and spawned a booming black market for greenbacks.

The decision, combined with the recent lifting of export taxes on many agricultural products, will expose Latin America’s third-largest economy to international market forces in ways not seen in over a decade.