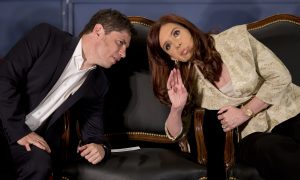 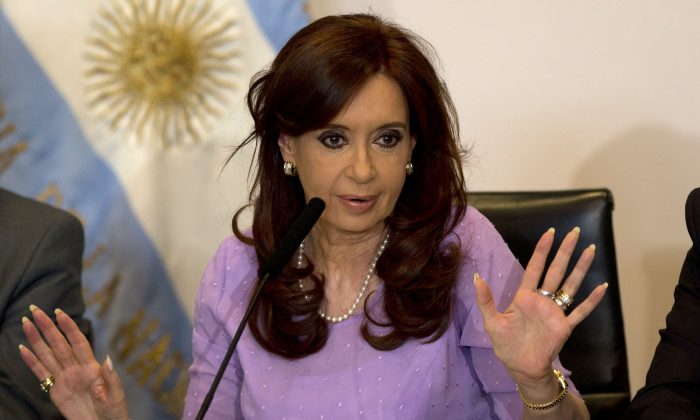 BUENOS AIRES, Argentina—Cristina Fernandez isn’t on Sunday’s presidential primary ballot, yet the influence of Argentina’s leader is all around it.

The populist president known for fiery rhetoric and withering critiques of political opponents has been dictating the tempo of the campaign, buoyed by rising popularity despite a sluggish economy and a scandal that rocked her administration.

Barred from seeking a third consecutive term, she is making clear she will wield her clout through the Oct. 25 election and possibly beyond.

Opposition candidates have gone from criticizing the spending behind Fernandez’s social welfare policies, including energy and transportation subsidies and perks for poor, single mothers, to instead talking about modifying the programs or even building on them.

“Previous presidents at this point were lame ducks. Fernandez is not,” said Maria Victoria Murillo, a professor of political science at Columbia University and an expert on Argentine politics. “She continues to be very effective.”

Sunday’s open primaries largely will be a trial run for the leading presidential candidates, who have all but won their party’s nominations. Voters also will select nominees for several governor and congressional seats. A candidate must get at least 1.5 percent of the total votes cast for that race in all the primaries to advance to the general election, effectively eliminating many minority party candidates.

The vote comes at a time when the South American nation of 41 million people is struggling. Independent economists put inflation at more than 30 percent, the Argentine peso has devalued sharply against the U.S. dollar in recent months and a long-standing dispute with a group of U.S. hedge funds has left the country shunned by foreign investment.

The major candidates have addressed these issues during heavily scripted events, but have been notably light on details about how they would solve them.

Daniel Scioli, the governor of the Buenos Aires province and a former vice president, is the governing party candidate vying to replace Fernandez. Mauricio Macri, the outgoing mayor of Buenos Aires and former president of the Boca Junior soccer club, is leading the opposition. Sergio Massa, who has held Cabinet and elective posts, is running on his own ticket after breaking with Fernandez’s political movement, known as Kirchnerismo.

Scioli is up by as many as 10 points over Macri in recent polls, a significant bump after the two spent months in a tight race. The rise partly coincides with Scioli’s June decision to name Carlos Zannini, one of Fernandez’s closest aides, as his running mate. In exchange for picking Zannini, Scioli received Fernandez’s endorsement and the two began campaigning together.

For both Scioli and Macri, the primaries provide a chance to test their strategies. If Scioli wins by a big margin, he’ll likely continue to embrace Fernandez. By contrast, if Macri does poorly, he’ll likely return to stronger criticism of Fernandez’s spending in hopes of attracting more independent voters.

Six months ago, few imagined Fernandez would be wielding such influence.

Her administration was clouded by the mysterious death of prosecutor Alberto Nisman. Nisman was found dead Jan. 18, hours before he was to appear before Congress to elaborate on his explosive accusation that Fernandez plotted to cover up the alleged role of several Iranian officials wanted in a bombing that killed 85 people at a Jewish community center in 1994.

Fernandez denied the allegations and the courts later threw out Nisman’s case. Authorities have yet to charge anyone in the prosecutor’s death.

The president’s clumsy handling of the scandal took a toll. In February, several polls put her approval rating in the low 30s. By May it had climbed to 40 percent and by the last weekend in July it topped 50 percent, said Roberto Bacman, director of the Center for Public Opinion Studies, a South American research firm.

“We are witnessing a very peculiar phenomenon,” said Bacman, who attributed Fernandez’s revival in part to Argentines’ general fear of major changes in the economy.

After months of promising to lead Argentines in a vastly different direction by attracting foreign investment, Macri did an about-face two weeks ago by saying he now supported Fernandez’s state takeovers of Aerolineas Argentinas airline and YPF oil company.

The move was widely interpreted as an acknowledgement that Macri couldn’t run as an anti-Fernandez candidate when roughly half the electorate supports her.

Fernandez was quick to highlight the flip-flop. The next day, while inaugurating a road while Scioli stood at her side, she said: “We could have saved so much time if (the opposition) had realized just a little sooner” the value of the policies.

Scioli, a former powerboat racer who lost his right arm in competition, has walked a fine line between praising Fernandez’s policies and appealing to independent voters. He often talks of “gradualismo,” or gradual changes that he’ll make to the economy.

He has promised to slowly lift unpopular restrictions on citizens’ ability to buy U.S. dollars. Earlier this year, Macri said he would immediately lift the limits if elected. He quickly backed off after drawing sharp criticism that it wasn’t realistic, but he began making the promise again this week.

All the major candidates say they’ll solve the dispute with the foreign hedge funds, which Fernandez calls “vultures.” The issue goes back to the country’s $100 billion default in 2001. The group refused to accept lower-valued bond swaps and took Argentina to court in New York and won.

Paula Alejandra Vasconcelos, a single mother who lives in a poor neighborhood in southern Buenos Aires, said she hadn’t decided how she’ll vote.

She said she likes Fernandez’s policies but is turned off by the economic problems and recent scandals, including the death of Nisman.

“This country is like a science fiction novel,” she said. “And as Argentines, we have become used to this.”