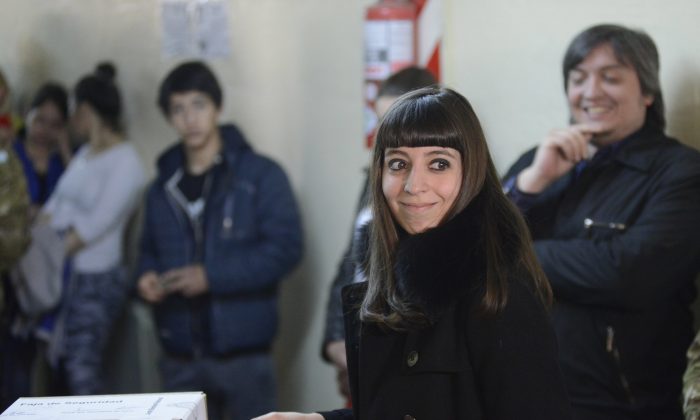 Florencia Kirchner, daughter of Argentina's former President Cristina Fernandez, casts her vote during elections in Rio Gallegos, Argentina, on Oct. 25, 2015. An Argentine prosecutor asked on Friday, July 15, 2016, a local court to seize the more than $4.6 million from the bank safe deposit boxes belonging to the 26-year-old Kirchner, as part of an investigation into alleged money laundering. (AP Photo/Francisco Munoz, File)
Americas

BUENOS AIRES, Argentina—A judge on Friday ordered the seizure of more than $4.6 million from a bank safe deposit box belonging to former President Cristina Fernandez’s daughter as part of an investigation into alleged money laundering.

Fernandez called the probe “a media stunt” and said the money belongs to her family. She said that it came from changing savings in pesos to dollars and that she recently declared the sum to authorities.

Argentine authorities had opened the box belonging to Fernandez’s daughter, Florencia Kirchner, on Thursday night at the request of the daughter in an effort to clear her name.

The ruling by Judge Julian Ercolini included two other bank accounts and came after a request by a local prosecutor Friday. Ercolini said in a statement that the seizure was needed “to preserve the state of things” and to ensure that the money “cannot be altered or modified.”

“That the funds in question have been duly declared is irrelevant because in the maneuvers being investigated, what is being discussed is its origin,” said Ercolini, who is also investigating construction businessmen with close ties to Fernandez’s family as part of a widening probe into allegations of money laundering.

The judge is trying to determine whether Fernandez’s family received payments through hotels it owns in southern Argentina from businessmen who benefited from the granting of public works contracts. Prosecutors say the alleged scheme would have allowed the money to be laundered.

Argentine media showed images of blocks of cash from the box, which has stirred criticism of Fernandez’s 26-year-old daughter.

Kirchner said Friday that the money is partly from the inheritance left by her father, former President Nestor Kirchner, who died in 2010.

“I asked them to open them because I have nothing to hide,” she said on social media.

She added that all the cash had been previously stated in sworn declarations as well as before Argentina’s anti-corruption office. “The legal proceedings against my family breach all the laws,” she said.

Corruption allegations swirled around Fernandez during her eight years in the presidency. Since leaving office in December, she has also been included in investigations involving allegations of state fraud and possible illegal enrichment.