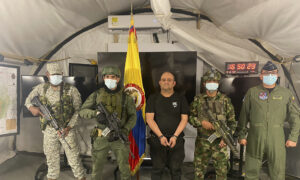 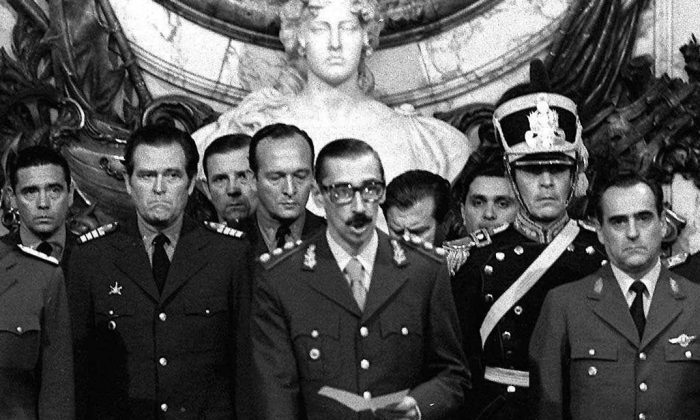 In this March 24, 1976 file photo, Argentina's dictator Gen. Jorge Rafael Videla, center, is sworn-in as president at the Government House in Buenos Aires, Argentina. With a world divided by the Cold War, South America's dictatorships in 1975 agreed to start exchanging information on political dissidents, trade unionists, students and any individual suspected of being leftist. (AP Photo/Eduardo Di Baia, File)
Americas

BUENOS AIRES, Argentina—Argentina’s last dictator and 14 other former military officials were sentenced to prison for human rights crimes, marking the first time a court has ruled that Operation Condor was a criminal conspiracy to kidnap and forcibly disappear people across international borders.

The covert operation was launched in the 1970s by six South American dictatorships that used their secret police networks in a coordinated effort to track down their opponents abroad and eliminate them. Many leftist dissidents had sought refuge in neighboring countries and elsewhere.

An Argentine federal court on Friday sentenced former junta leader Reynaldo Bignone, 88, to 20 years in prison for being part of an illicit association, kidnapping and abusing his powers in the forced disappearance of more than 100 people. The ex-general who ruled Argentina in 1982-1983 is already serving life sentences for multiple human rights violations during the 1976-1983 dictatorship.

In the landmark trial, 14 other former military officials received prison sentences of eight to 25 years for criminal association, kidnapping and torture. They include Uruguayan army colonel, Manuel Cordero Piacentini, who allegedly tortured prisoners inside Automotores Orletti, the Buenos Aires repair shop where many captured leftists were interrogated under orders from their home countries. Two of the accused were absolved.

The sentences are seen as a milestone because they mark the first time a court has proved that Operation Condor was an international criminal conspiracy carried out by the U.S.-backed regimes in Chile, Argentina, Bolivia, Brazil, Paraguay and Uruguay.

“This trial is very meaningful because it’s the first time that a court is ruling against this sinister Condor plan,” she said.

The investigation was launched in the 1990s when an amnesty law still protected many of the accused. Argentina’s Supreme Court overturned the amnesty in 2005 at the urging of then-President Nestor Kirchner.

“Forty years after Operation Condor was formally founded, and 16 years after the judicial investigation began, this trial produced valuable contributions to knowledge of the truth about the era of state terrorism and this regional criminal network,” said the Buenos Aires-based Center for Legal and Social Studies, which is part of the legal team representing plaintiffs in the case.

During the case, several defendants either died or were removed from the judicial process. Since the bodies of many victims have never been found, Argentine prosecutors argued that the crime of covering up their deaths continues today, and that statutory time limits don’t apply.

The victims included Maria Claudia Irureta Goyena, the daughter-in-law of Argentine poet Juan Gelman, who was pregnant when she was kidnapped and held for months inside Automotores Orletti before an Argentine air force plane took her to Uruguay. She gave birth there, and then was disappeared. Decades passed before her daughter, Macarena Gelman, discovered her own true identity.

A key piece of evidence in the case was a declassified FBI agent’s cable, sent in 1976, that described in detail the conspiracy to share intelligence and eliminate leftists across South America.

Operation Condor was launched in November 1975 by Chile’s Pinochet, who enlisted other dictators in South America. But the covert program went much further: The U.S. government later determined that Chilean agents involved in Condor were behind a car bombing that killed the country’s former ambassador Orlando Letelier and U.S. citizen Ronni Moffitt in Washington, D.C., in September 1976. Operation Condor’s agents also tracked other exiles across Europe in efforts to eliminate them.

“This is a great ruling, with stiff sentences,” Luz Zaldua, a lawyer representing families of the victims. “It has established that Condor was a supranational criminal association, and that’s important—not just for our country but for all countries that have been part of this operation.”