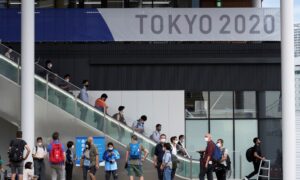 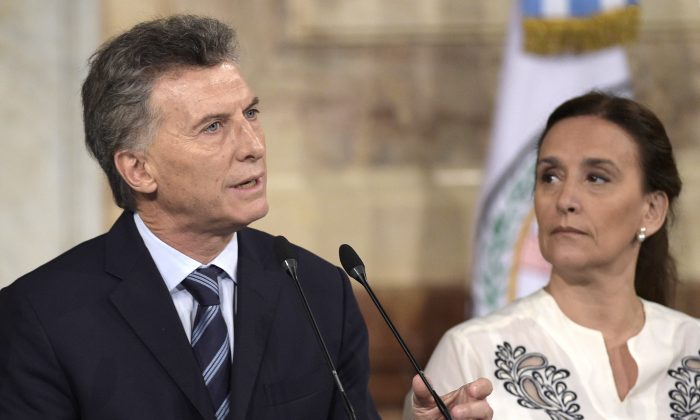 Argentine President Mauricio Macri (L) delivers a speech next to Vice President Gabriela Michetti during the inauguration of the 134th period of ordinary sessions at the Congress in Buenos Aires, Argentina, on March 1, 2016. (Juan Mabromata/AFP/Getty Images)
International

BUENOS AIRES, Argentina—Argentina toughened its immigration law Monday, making it easier to deport foreigners who commit crimes or who are being investigated.

The changes to the 2003 law were implemented by presidential decree, which cites a rise in organized crime committed by foreigners. It restricts those serving sentences or with criminal records from entering Argentina and fast tracks the expulsion of foreigners who commit crimes including drug dealing, arms trafficking or money laundering.

The toughening of the law is in stark contrast to Argentina’s traditionally welcoming immigration policy. It seeks to curb a spike in crime that remains a top concern for Argentines ahead of this year’s congressional elections.

Human rights advocates said it risks stigmatizing foreigners who make up 4.5 percent of the 40 million people living in Argentina.

“Amnesty International considers that it’s a mistake to reduce the migration phenomenon to a debate on national security that associates migrants with criminals,” the rights organization said in a statement Monday.

“Even when States have the authority to establish rules in migratory issues, they can’t violate the rights guaranteed under the constitution and international human rights treaties,” it added.

Amnesty said the overhaul of the immigration law is a regressive move, introducing roadblocks for the entrance and residence of migrants, speeding up expulsions, reducing procedural guarantees and breaching rights to a legitimate defense.

“You have to make a distinction between measures that have to do with security,” she told a local radio station. “Argentina is an open country that will always be in favor of diversity.”

“Avoiding lawmakers, they are committing a clear violation of human rights in the name of security, when security problems can and should be solved respecting our constitution and increasing our rights, not reducing them,” he said.