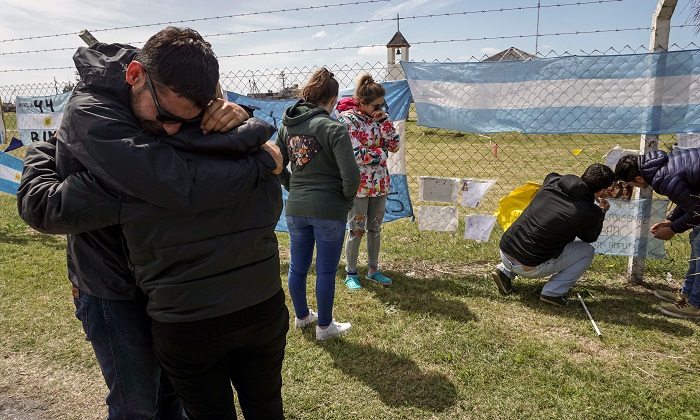 Relatives of crew member Damian Tagliapietra express their grief outside Argentina's Navy base in Mar del Plata, on the Atlantic coast south of Buenos Aires, on Nov. 24, 2017 the day Argentina's navy confirmed an unusual noise heard in the Atlantic near the last known position of a missing submarine appeared to be an explosion, dashing the last hopes of finding the vessel's 44 crew members alive. (Eitan Abramovich/AFP/Getty Images)
World

After a massive international search effort, the Argentinian navy has abandoned hope in finding any of the 44 crew members of a submarine alive. The submarine went missing on Nov. 15.

Navy spokesman Capt. Enrique Balbi told reporters Nov. 30 that the rescue mission had been “extended for more than twice what is estimated for a rescue,” reported AP.

“We’ve had 28 ships, nine aircraft, 4,000 people involved, 18 countries supporting,” Balbi told reporters. “Despite the magnitude of these efforts, we’ve been unable to find the submarine.”

Balbi said added that search efforts to find the ARA San Juan will continue. The Argentinian vessel went missing in the South Atlantic after it left a naval base in southern Argentina on Nov. 13.

Hopes for another outcome and finding the crew had been low this week. If the lost German-built submarine remained intact under the sea, the crew only had sufficient oxygen to last 7 to 10 days.

Many had already given up hope in rescuing the submariners after learning that a suspected explosion – described as a “hydro-acoustic anomaly” – had been detected in the area where the ARA San Juan last communicated from.

The navy said ARA San Juan’s captain had reported water entering the submarine’s snorkel which resulted in the short circuiting of a battery. Several hours later, the captain communicated that the problem had been contained.

Gracias @CaptAlejandro
Thanks a lot @USNavy
And 16/18 countries (i'm not sure) for give us all the tools to find our heroes.
I'm death.
Gracias a todos los que trabajaron desde el comienzo. #GraciasSoldadores #ArgentinaTeAmo y te abrazo. #ARASanJuan #Los44 pic.twitter.com/v0TsNAPjNX

AP reported that some of the crew’s relatives broke into tears after learning of the navy’s announcement.

Others made use of social media to remember those they have lost.

“I stay with this image,” Jesica Gopar, said in a tweet that included a photo of her husband, submarine officer Fernando Santilli, smiling and holding their young son in his arms.

“He’s the most beautiful being that God could have put on my path 13 years ago,” she wrote. “He’s a hero who must be recognized along with his 43 other crew members. I hope you didn’t suffer my love.”