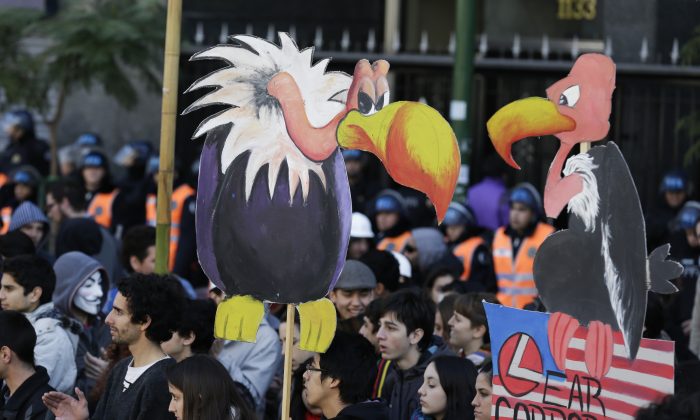 Protesters hold cutouts of vultures during a demonstration in front of the U.S. Chamber of Commerce in Buenos Aires, Argentina, on Aug. 15, 2014. Students gathered to protest against the recent closing of U.S. company R.R. Donnelley & Sons printing plant on the outskirts of the Argentine capital, the layoffs of about 60 workers at the American car parts maker Lear and against the ruling by U.S. Judge Thomas Griesa in favor of a U.S. hedge fund, known locally as "vulture funds." (AP Photo/Victor R. Caivano)
Opinion

Legal systems in the world’s wealthiest nations often do not understand the all- encompassing challenges confronting emerging economies. Those outside the Americas may not have paid much attention to the battle between Argentina and a few bondholders, but should take note: The legal tangle over Argentinian bonds provides a salutary lesson on the perils of a nation’s integration with a financial world in hyper-speed, where one wealthy individual can disrupt an entire country.

Such is the case for Argentina after the nation went into default on bonds and then attempted to restructure the debt. A small group of bondholders purchased defaulted bonds for pennies on the dollar from other investors wanting out and, with the help of U.S. courts, now insists on full repayment plus penalty interest.

Bonds, issued for all types of obligations from infrastructure to education, are generally considered a low-risk form of investment when issued by developed countries, but can pay higher interest in developing countries due to higher risk. Countries that cannot make good on their dues, whether because of an economic downturn, overspending on social programs, or failure to collect enough taxes, confront higher borrowing costs. Countries must balance budgets or borrow heavily from the international markets—or default as the inability to pay the bond obligations looms.

In the 1990s Argentina had effectively dollarized its economy at a 1:1 exchange rate. The U.S. dollar was used as a medium for transactions, largely to avoid currency risk with attendant interest rate fluctuations.

But borrowing in dollars was a costly endeavor. In 2001, faced with massive public debts, Argentina defaulted on its bonds, leading to what was then the largest financial default in history at $100 billion, a record since been broken by Greece in March 2012, which defaulted on more than $350 billion in bonds. The European Union, the International Monetary Fund, and Germany subsequently offered bond restructuring. Creditors agreed to new terms, namely being paid less, in order to receive something rather than nothing.

From that 2001 default, Argentina then restructured in 2005 and 2010 with 93 percent of its recorded bondholders. About 7 percent of the 2001 bondholders refused to participate in the restructuring events, holding out for full payment at some future date, albeit with interest. These so-called holdouts, labeled as the buitres, or vultures, in Argentine media, are led by NML Capital and venture capitalist Paul Singer, using courts in the United States and elsewhere to chase this outstanding debt, seizing Argentine assets wherever they may be, even a naval ship at port in Ghana.

On July 31, after exhausting all appeals, Argentina officially defaulted on $1.3 billion in bond payments to these holdouts that a U.S. judge in New York had ordered them to pay in 2012. Argentine President Christina Fernández de Kirchner has vowed to ignore the decision by refusing to pay the holdouts.

That is the U.S. version of events. Argentina takes a counter position: Demands for paying the holdouts is similar to extortion, and Argentina has made a full “good faith” payment for the current bondholders, those who had agreed to earlier restructurings in 2005 and 2010.

But U.S. Judge Thomas Griesa blocked distribution of the payment, a decision affirmed by the U.S. Supreme Court, which refused to hear Argentina’s appeals. Argentina has since been held in contempt of court, by further refusing to deal with the holdouts, attacking the judge and mediator as incompetent.

The legal confrontation stems from actions of Argentina’s former President Nestor Kirchner, who signed away Argentina’s financial sovereignty during the 2005 and 2010 restructurings by conceding to future litigation venues in the United States and not Buenos Aires.

Another legal tangle—the original contracts of 2001 did not include what has since become a common condition known as collective-action clauses, which allow a super-majority to impose restructuring on all bondholders. The holdouts to Argentina, protected under U.S. laws, could not be forced to take lesser payment, as in the case of Greece and many other countries that include these clauses.

For technical financial reasons, such clauses alone however, cannot stop a determined group of holdouts with deep pockets from pursuing past debts.

The scenario suggests that Argentina, by accepting U.S. dollars on U.S. terms, cannot effectively declare bankruptcy and move beyond these holdouts.

A main criticism in this case is that a sole U.S. judge may not understand the deep complexity of his court order in the long term on developing countries. Indeed, the IMF had even petitioned the U.S. Supreme Court as a friend of Argentina to hear the case due to its leviathan knock-on effect on the developing countries that require rescue after defaults.

Governments often preserve financial stability, as was the case with the massive injection of U.S. Treasury support for banks after the global financial crisis hit in 2008, or with the IMF/European Union lending to Greece in 2012. If countries are held to strict financial terms to pay back the full principal and interest of the original bond terms, then they, unlike corporations and individuals, cannot start anew.

Such practices could hit developing countries such as Congo and Grenada especially hard. If debts cannot be restructured, then countries and their citizens are trapped with overwhelming payments into perpetuity.

The alternatives for developing nations are few. In a global economy, most bond funding is sourced in dollars. The Chinese renminbi is gaining in clout, but is not serious actor, in part due to Chinese capital controls and inconvertibility. Since the U.S. dollar is still considered the paramount reserve currency due to liquidity and volume, most bonds issues are in that currency and debt payments must be in dollars usually paid to banks on Wall Street, the transfer agents between countries and individual investors.

A deeper ethical question is whether the U.S. courts should be used to enrich billionaires at the expense of the developing world. The world has long trusted the U.S. system, which has led international rescues since the Bretton Woods Agreement of 1944 with the institutionalization of the World Bank and IMF.

Wealthy countries do not need to borrow in dollars, but poor countries in sub-Saharan Africa and South Asia could essentially become enslaved to a never-ending debt cycle if the courts allow investors to successfully sue bankrupt countries for repayment.

Unfortunately, developing nations do not have a reserve currency with the depth and liquidity, so readily accepted by investors, as the U.S. dollar for stability. Emerging economies forced to deal with dollar bonds and U.S. banks as clearinghouses for their financial holdings must take special note of the latest Argentine default.

Fernández’s position in defiance of U.S. court orders is popular among her citizens. She has suggested paying the restructured holders via Argentinian banks, not U.S. ones. How this will sit with investors who have trusted the U.S. courts for protection, is still playing out; if it works, other countries may also insist on using domestic banks in a yield-hungry world.

Will Hickey is associate professor at Linton Global College in Daejeon, South Korea. © 2014 The Whitney and Betty MacMillan Center for International and Area Studies at Yale.