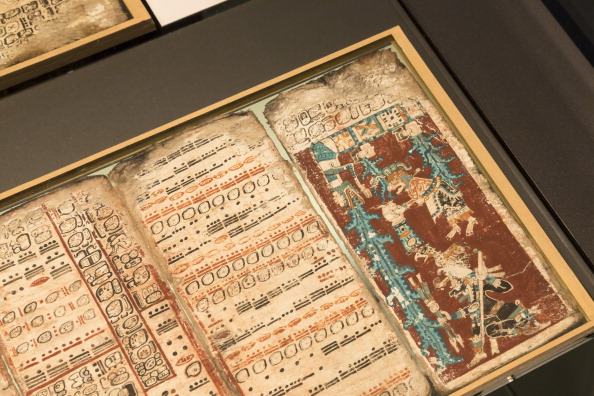 A sky caiman vomits water on one of the last pages of the 12th-century Dresden Codex, also known as the 'Codex Dresdensis', one of four historic Mayan manuscripts that still exist in the world and that together suggest modern civilization will come to an end on December 21, at the Saxon State Library on Nov. 8, 2012 in Dresden, Germany. (Joern Haufe/Getty Images)
World

The Argentine government has closed down access to a mountaintop for several days due to concerns that it will be the site of a mass suicide for people who believe the world will end on Friday.

Authorities will shut down the Uritorco peak from Dec. 20 to Dec. 22 after an appeal appeared on Facebook, asking people to climb the mountain and take part in “massive spiritual suicide,” in connection to the end of the Mayan calendar on Dec. 21, according to AFP.

Gustavo Sez, the mayor of the nearby town of Capilla del Monte told the publication, “It was a decision taken by consensus, to pre-empt any distortion of the Mayan prophecy.” The town is located around 470 miles north of Buenos Aires.

There have been numerous claims of UFO sightings on top of the mountain over the years. Indigenous peoples also believed that the mountain was sacred.

“The truth is that we have been working on the issue ever since we learned about it. We are concerned that while it may be a joke, you never know what could happen,” Rafael Garcia Perez, the manager of Uritorco Mountain, told Clarin.com.

According to Worldcrunch, the Facebook page for the “massive spiritual suicide” said that 150 people indicated that they would attend the event.

“We do not want to be too careless or contribute to any action that may serve such ideas, however crazy they sound,” Perez said, and added: “The priority is to protect every visitor.”

A source close to the Anchorena family, which owns the mountain, told the Clarin website: “Surely they will ask the authorities to help us block all access to the mountain, including for all the various alternative paths that exist to go up to the top. However, the bar-restaurant at the bottom will stay open.”

Over the past several weeks, NASA and other governments have issued statements saying that the world will not end on Dec. 21.

In a posting earlier this week, NASA said that if people are still around on Dec. 22 and “if you’re reading this story, it means one thing: The World Didn’t End Yesterday.”

“The whole thing was a misconception from the very beginning,” John Carlson, head of the Center for Archaeoastronomy, said in a statement. “The Maya calendar did not end on Dec. 21, 2012, and there were no Maya prophecies foretelling the end of the world on that date.”

Carlson notes that none of the artifacts, ruins, tablets, or standing stones left by the Mayans indicated anything about the end of the world.

“If there were anything out there like a planet headed for Earth,” stated NASA astrobiologist David Morrison, “it would already be [one of the] brightest objects in the sky. Everybody on Earth could see it. You don’t need to ask the government, just go out and look. It’s not there.”