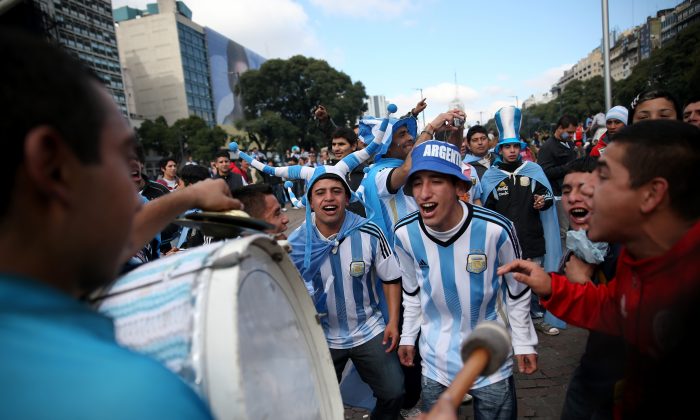 Argentinian supporters of the national soccer team in Buenos Aires. They celebrated their team’s great effort in World Cup 2014.
Americas

BUENOS AIRES, Argentina – Though Argentina were defeated in the World Cup Final against Germany last Sunday, Argentinians still went to the streets and celebrated the performance of their team.

Tens of thousands gathered around the ‘Obelisco,’ the iconic monument located in downtown Buenos Aires, with flags and painted faces in blue and white, the national colors. The overall comments were that they had a mix of “happiness and sadness,” but most of them mentioned a sense of “pride” for the team spirit that the players had shown during the whole tournament.

Juan Manuel López was among them and told The Epoch Times that, in spite of being sad for the result, he preferred to highlight the good side.

“I feel very proud for having reached that place, the second place. One always wants to be on the top, but I think that being in second place, with such good players and team, it’s something good and we have to celebrate it.”

About the performance of the key figures of the team, he said “they played well during every match, but they were figures of a team rather than individual ones.

“[Lionel] Messi had some brilliant moments, but one expects more of him. The same happened with [Gonzalo] Higuain, [Ezequiel] Lavezzi and all of them; they could have done it way better. But the performance of the team as a whole was good,” said López.

Nadia Silingüa was another fan who went to the streets to cheer for the Argentinian team. “Of course, we wanted to win. But the truth is they did their best.

“The German team was a difficult one … and our team had willpower, passion, and love for the game. But the other team was a hard one. I don’t know why we didn’t win, we had everything, except that sometimes we didn’t have enough luck, that’s the truth.”

That was the overall feeling on the streets and the social media in Argentina. “We were very close, we lost it just in the last 10 minutes of extra-time. After beating Brazil 7-1, the Germans were pretty sure that it would be easy to beat us, but it wasn’t. And we are all very proud of the team and how they played … we deserve to celebrate because they had a great World Cup. There are always winners and losers, but we are still very proud,” said María Laura Vigliero, a professor who also celebrated in the streets of Buenos Aires.

The players also talked about these feelings. Javier Mascherano, a key figure in the team, admitted in a press conference that the team felt “a huge pain” because they “wanted to take the Cup to Argentina.” But then he added, “In a country where people find it difficult to believe in something, they believed in us, in the team. I have that relief.”

He also highlighted that in spite of not winning the Cup, they showed “some values to the people, of how to play, how to do it, how to not give up. We hope we can show you a way to move on.”