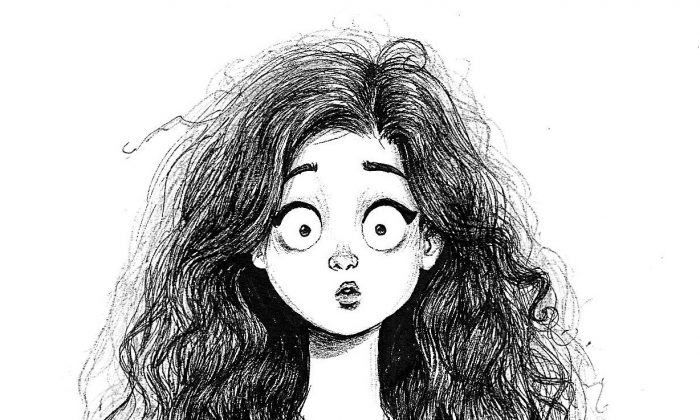 So this is Cassandra Calin. No, seriously, that’s her. She’s a 21-year-old comic artist, illustrator, and graphic designer based in Montreal, Canada, and possibly an up-and-coming social media celebrity.

Her true-to-life humor and spot-on drawings already earned her some 80,000 followers on her Facebook page. But she aims higher with her dreams—and we’ll get to that in a while.

When I first encountered her drawings online, it occurred to me that she’s probably the funniest girl I’ve seen on the Internet, and so it was with quite some appreciation that I read her positive response to my email interview request.

Calin’s family is from Romania but they moved to Canada when she was 10. “Because I was very young, I never truly felt a culture shock,” she said. “I learned French in a matter of months, I already knew a bit of English from playing video games and watching Cartoon Network and I quickly made new friends.” She still misses her family and friends back in Romania though and visits every once in a while during summer.

In hindsight, it’s not hard to see how she ended up being a comic artist. “I am not exaggerating when I say that I’ve been drawing all my life,” she said.

In a Q&A with her fans she revealed she started as a self-taught furniture “beautifier.”

“That was actually real and a genuine apology to my mum and dad,” she explained to me. “I scribbled on their furniture and thankfully, eventually switched to drawing on paper.”

Though her family “had a great sense of humor,” drawing on furniture can be traumatizing—for parents.

Despite being “surrounded by people who always enjoyed having a good laugh,” Calin was never a funny person in the sense of being a classroom clown.

“No, no! I was the shy and quiet girl who was always sketching or drawing caricatures of the teachers during lectures,” she explained.

“But when I was with my friends, it was a whole other story,” she said.

Her star began to rise about a year and a half ago when she started to post her drawings online. In about six months, she had 10,000 followers on Tumblr. In another eight months it was already 40,000.

As opposed to common cartoon stereotypes of wild caricature or idealized characters, Calin seems to be winning points by doing just the opposite. She basically draws real people in real situations.

“My comics are autobiographical and all the characters I include are based on actual people,” she said. “So yes, my character is the real me; expressive, sarcastic, geeky and a bit grumpy.”

And there’s another personal touch to her art. Even on the first sight one may notice she puts incredible amount of effort into drawing detailed, almost realistic looking hair for her character.

“In my first doodles, I didn’t draw hair as detailed as I do now. When I drew comics, I simply scribbled characters, which all looked the same and only focused on the story,” she said. “I always enjoyed drawing realistic looking hair, but I wasn’t sure how that would work with a more cartoon-y style.”

Still, she gave it a try.

The result was the “Hair Expectations vs. Reality” comic and—it went viral.

“After that, I kept drawing hair related comics, because I had a lot to say regarding that subject!” she said. “All my hair comics and jokes are ideas I’ve got after struggling with my hair that day. I eventually made a list of things that annoy me about my hair and I drew everything based on that. There were so many things I wanted to talk about that I even made a second part to my 9 truths series about having long hair.”


Chances are, without Calin’s drawings I would have never understood the plight of having long curly hair. Even after seeing her comics, I was suspecting hyperbole.

So I asked. I mean, can it really be that tough?

“Yes, to me it is! Long hair requires a lot of maintenance, patience and prayers for it to look good,” she said. And, hopefully, I’m a more empathetic person toward the long curly-haired since.

Of course, that’s not the only thing an “expressive, sarcastic, geeky and a bit grumpy” 21-year-old has to say about life. Whether it’s being single, busy, sleepy, tired, hungry, living in Canada, or shopping, Cassandra is there, sometimes sulking, but ultimately pulling through. And it looks like people like it—quite a bit.

“My art is my way of expressing myself; how I feel, what my views are, who I am… Some people write, others verbally express themselves, I make art. It’s a passion and a huge part of my life,” Calin said.

And I thank you for sharing it.

Oh, and what’s the big dream of hers I promised to divulge?

“I have always wanted to make a comic book series, so that is certainly one of my biggest goals,” she said. “But I can say that I’m very happy with where I’m at right now and I feel like I’ve accomplished so much already. I get to do what I love and that already is a fantastic achievement.”


Thank you for talking (well, writing) to Epoch Times.

This Cake Went Viral. Why? You Have to See Its Other Side