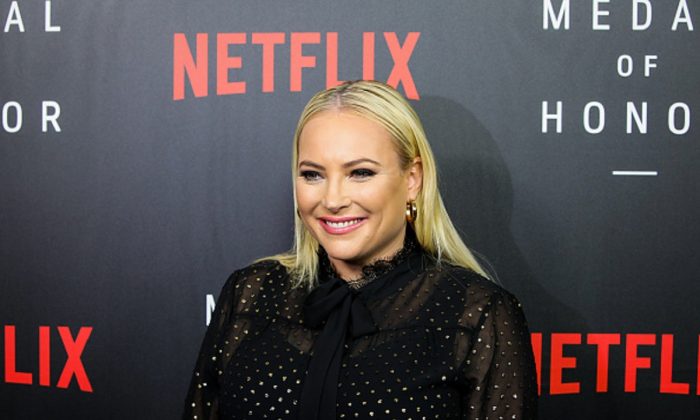 Meghan McCain, Co-Host of 'The View', at the Netflix 'Medal of Honor' screening and panel discussion at the US Navy Memorial Burke Theater in Washington, on Nov. 13, 2018. (Photo by Tasos Katopodis/Getty Images for Netflix)
Entertainment News

‘Are You Her Publicist?’: Meghan McCain, Seth Meyers Have Heated Exchange About Ilhan Omar

“The View” host Meghan McCain had a testy exchange with “Late Night” host Seth Meyers after he challenged her about previous repeated criticisms on Rep. Ilhan Omar’s (D-Minn.) controversial tweets.

The interview, which started quite cordially, quickly became heated when Meyer claimed it was “fairly dangerous” for McCain to raise Omar’s name after she had some death threats against her.

“Do you think, you know, she has obviously now stated that she needs to be more careful with her language, don’t you think other people who talk about her need to be more thoughtful as well? Or do you stand by those comments of tying her to this, her rhetoric, to this synagogue shooting?” Meyers asked.

In response, McCain said, “I don’t think I tied her to it in particular. I’m calling out what I see as anti-Semitic language and when you’re talking about…”

“But even after, you called her out even after she apologized for it. I do want to establish the timeline,” Meyer interrupted.

McCain replied saying, “I think that Democrats are hedging on this and I think it’s very dangerous. And I think Chuck Schumer and I are in alignment about Israel’s stance in geopolitical politics. I think it is of the utmost importance and I think she is bringing her party to extremism on this. And I think we have to look to Europe and what’s happening over there and in British politics. Anti-Semitism is very common and I see it happening over there and I worry about it happening over here. I stand by everything single thing I’ve said and if that makes me unpopular in this room or in front of you, so be it.”

At one point during the exchange, Meyer asked McCain whether there was a way to talk about Israel without being considered anti-Semitic, to which McCain replied, “Yeah. I just think you can’t talk about ‘Jews hypnotizing the world’ and ‘all about the Benjamins,'” referring to two of Omar’s controversial tweets.

“You do keep bringing up the two tweets she apologized for,” Meyers interjected, “and I think it’s a little unfair to her, especially because…”

Meyers answers: “No. I’m just someone who cares about the fact that there’s someone out there who is in a minority, who has had death threats against her, and I think we should all use the same language that you’re asking her to be careful about her language. And I would ask that everyone to be careful about theirs.”

Omar previously drew widespread condemnation for anti-Semitic tropes on social media, where she implied that a prominent pro-Israel lobby group, the American Israel Public Affairs Committee (AIPAC), paid off lawmakers for their support of Israel. She later sparked more outrage when she accused some politicians in Washington who supported Israel as having dual loyalty. The freshman congresswoman has since apologized for her comments.

After a deadly shooting at a San Diego synagogue last month, McCain brought up Omar in a discussion about the shooting, suggesting that Omar’s rhetoric was also a recent example of anti-Semitism.

“I do think when we are having conversations about anti-Semitism we should be looking at the most extreme on both sides, and I would bring up Congresswoman Ilhan Omar and some of her comments that got so much attention,” she said on ABC program “The Week.”

McCain also argued that Speaker of the House Nancy Pelosi (D-Calif.) wasn’t “hard enough in her response to [Omar] trafficking in anti-Semitic language.”

McCain’s husband, Ben Domenech, who is the publisher of the Federalist, criticized Meyers in a series of angry tweets, which have now been deleted, reported Fox News.

He apologized on May 8 saying, “I love my wife. I apologize for rage tweeting about how Seth Meyers treated her. I don’t like him, I think he’s a hack, but I shouldn’t have done that. I’m sorry to anyone I offended.”

I love my wife. I apologize for rage tweeting about how Seth Meyers treated her. I don’t like him, I think he’s a hack, but I shouldn’t have done that. I’m sorry to anyone I offended.