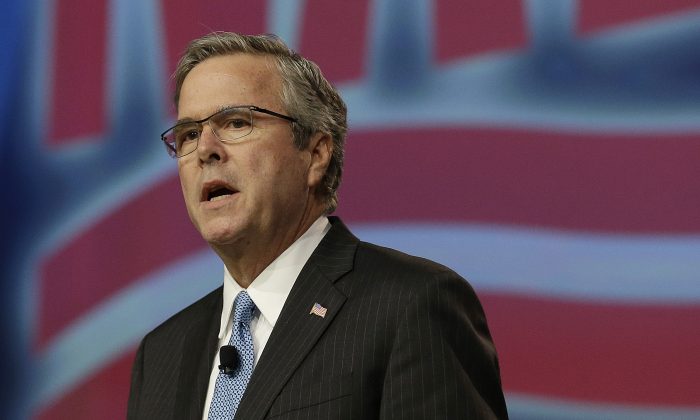 Does Jeb Bush have an ingenious plan, or is he stuck in the same old Republican flip-flop on immigration that’s blamed for busting Mitt Romney?

With Mitt Romney dropping his presidential aspirations on Friday, more gazes are set upon Jeb Bush. The Florida ex-governor leads the polls among potential GOP candidates, amassing cash and allies for one monumental campaign.

But there’s one break-neck hurdle in his way–immigration. After all, it was Romney’s comment that illegal immigrants should deport themselves that was later blamed for his failed 2012 run (Latinos didn’t like it).

Bush seems to be well aware of the divisive issue, even writing a book on it. But how many voters are going to read it?

Instead, his Friday five-minute bit on immigration in San Franciso may have sent him down Mitt’s road.

Talking about some 5 million immigrants who live in the country illegally by overstaying their visa, Bush said, to applause, that “we ought to be able to find where they are and politely ask them to leave.”

We ought to be able to find where they are and politely ask them to leave.
— Jeb Bush about immigrants

However polite, that may be understood as a call for massive deportations—a strong comment from a man who’s trying to win the Latino vote.

“[He’s] trying to appeal to more conservative people in the party and that’s what he has to do in order to get the nomination,” said James Thurber, American University professor and director of the Center for Congressional and Presidential Studies. “Then he’s got to swing back if he wants to attract Latinos to the party in the general election—it’s going to be hard.”

Bush may still explain his way out of this one.

Looking at Bush’s comments in a broader context, he also said it’s unrealistic to deport everyone and so there needs to be a path to citizenship. So the remark can also be phrased as “if there were a path to immigration and people did overstay [their visa] then they truly are illegal,” said Kathleen R. Arnold, DePaul University political science professor.

That’s a bit nuanced, but a more palatable position for the left.

Bush can also say he spoke in principle—there needs to be a way to track down and deport people who overstay their visa, but that doesn’t mean the government should actually do it or do it on a large scale.

In any case, Romney out of the picture is good news to Bush, Thurber said. Whether he successfully pulls off the immigration dance remains to be seen.