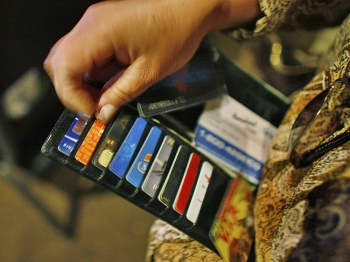 YOUR LIFE STORY: What would you do if one day you cannot find it? (Joe Raedle/Getty Images)
US

Are You a Target for Identity Theft?

Steve Gigliotti
View profile
Follow
biggersmaller
Print
In an age when information is shared instantly, identity theft is on the rise. “Statistics show that you are 10 times more likely to have your identity stolen than to have your car stolen,” said Mike Prusinski, senior vice president of Corporate Communications at Lifelock. “We have to change the attitude in the U.S. that this won’t happen to me."

Oct. 16–22 marks the National Foundation for Credit Counseling (NFCC)’s fourth annual Protect Your Identity Week. It is estimated that 8.1 million people were victims of identity theft in 2010.

Identity theft can be used to open new accounts, gain employment, and even seek medical treatment. The statistics are most likely lower than the actual number of incidents, as many cases go unreported.

Lifelock specializes in protecting consumers’ identity by blocking possible fraudulent transactions and instantly alerting its customers in the event of possible identity fraud. According to Prusinski, identity theft has given rise to an entire industry of companies aiming to help protect your identity.

Florida, Arizona, California, Texas, and Georgia are among the hardest hit states for identity theft. According to Prusinski, these states all share some similarities: they are either bordering states or states where there are immigration problems, giving rise to identity theft to obtain employment; they are popular tourist locations, and have a large elderly population—a group that is often targeted for identity theft, along with children.

The focus of this year’s Protect Your Identity Week is on stealing identities from children. In a press release, Bo Holland, CEO of All Clear ID, said, "We’ve scanned thousands of children’s identities and found that a little over 10 percent of all children have had their Social Security numbers stolen.

"With one out of every ten children’s identities compromised, it’s clear that child identity theft is a huge problem and one that parents need to be aware of," he added.

Adam Levin, chairman and co-founder of Identity Theft 911 and Credit.com, said that children are perfect targets for identity theft. Children have doormat social security numbers that are pure, with no history, and “If you were a thief you could have a run for more then a decade.”

Levin’s business not only works on prevention but on helping victims of identity theft get their lives back. He said that when most people hear the word portfolio, they think of their assets. But there are two more important aspects of your portfolio to consider: your credit portfolio and identity portfolio.

“You have to be the professional manager of your credit portfolio and your identity portfolio. They should be built, nurtured, and protected as assets,” Levin said.

The Federal Trade Commission (FTC) received 250,854 complaints about identity theft in 2010, a number that reflected approximately one-fifth of the total complaints received by the agency. According to the FTC Identity theft was the subject that most consumers complained about.

With Black Friday (Nov. 25) and Cyber Monday (Nov. 28) fast approaching, it is important for consumers to use due diligence. Prusinski warned to be careful when buying online. Never connect to unsecured networks, and when possible buy online with gift cards, as opposed to debit or credit cards.

This month 111 individuals were indicted in the largest identity theft takedown in U.S. history. The network was connected to identity theft rings in Europe, Asia, Africa, and the Middle East.

“Credit card fraud and identity theft are two of the fastest growing crimes in the United States,” said Queens District Attorney Richard A. Brown, in a statement. “Even after the culprits are caught and prosecuted, their victims are still faced with the difficult task of having to repair their credit ratings and financial reputations.”

More information on identity theft and protection can be found at protectyouridnow.org