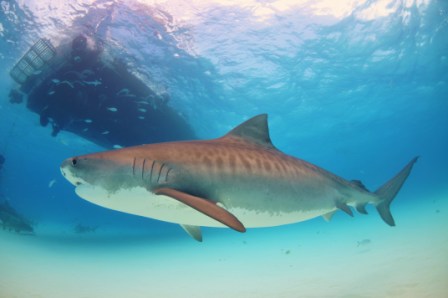 A large tigershark circles a boat. Many of these sharks are now caught and killed only for 'sport'.
Opinion

Are We Overfishing The Future of Sharks?

I was recently bemoaning the sorry state of the Oceanic Whitetip Sharks and mentioned that there was just a Conference of the Parties (CITES) meeting in Bangkok about 6 months ago to look at shark protection. What was only a few years ago the most abundant large predator on Earth is now little more than a memory.

I also made mention of the fine work of Dr. Shelley Clarke who estimated from market surveys that between 26 million and as many as 73 million sharks were harvested each year worldwide. Her best estimate was 38 million sharks killed annually.

We may have had that wrong. On March 1, 2013, “Global Catches, Exploitation Rates and Rebuilding Options for Sharks,” was published by Dr. Worm and three other researchers from Dalhousie University teamed up with scientists from the University of Windsor in Canada, as well as Stony Brook University in New York, Florida International University (FIU) in Miami and the University of Miami. A very powerful team indeed.

Their shocking findings are that shark fishing is now globally unsustainable. Their more recent estimates put the carnage at 97 million in 2010. The possible range of mortality is between 63 and 273 million annually. This equates to somewhere between 7,200 and 31,000 sharks per hour.

“Sharks are similar to whales, and humans, in that they mature late in life and have few offspring” said Boris Worm. “Our analysis shows that about one in 15 sharks gets killed by fisheries every year. With an increasing demand for their fins, sharks are more vulnerable today than ever before.”

Within 30 years shark fin soup will no longer symbolize prosperity. Instead it will be a tribute to man’s greed and lack of commitment to his own future.