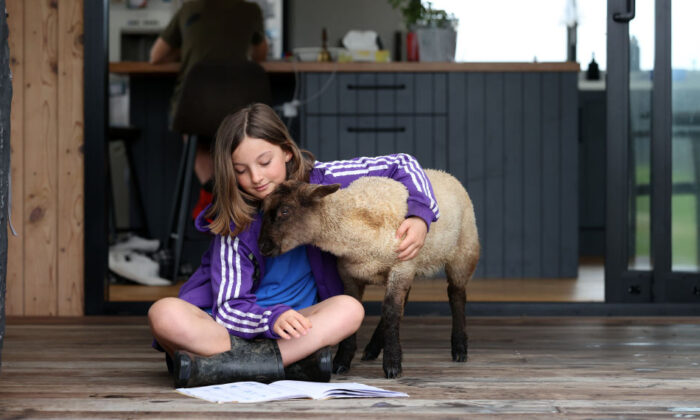 A 10-year-old girl takes a break from online learning to play with her pet lamb at home in Warkworth, Auckland, New Zealand, on Oct. 26, 2021. (Fiona Goodall/Getty Images)
Viewpoints

Are We Caring for Animals Over Our Children?

A couple of years ago, Vegans produced a large poster featuring three photos: a human baby, a piglet, and a lamb. The caption read: “Equal but Different.” The thinking behind this is absurd, for it implicitly denies the distinctiveness and the responsibility of human beings and proposes a view of the world that is driven solely by wishful thinking and sentiment.

We can have no quarrel, of course, with the word different, but to assert the equality of all living creatures is to ignore both common sense and the empirical evidence of our own eyes.

Most of us enjoy the company of animals and recognize the good they can do. Guide dogs are an obvious example, while lonely people can be comforted by the companionship of a dog, a cat, or even a cage bird, and most of us recognise that the higher animals, at least, have the capacity to love.

Saint Francis’s use of terms like brother and sister for fellow (non-human) creatures is a nice example of that respect for living things, without anthropomorphising them, which is characteristic of the higher religions.

Christians have no explicit revelation on this and must trust in God’s kindness and mercy. But the Church is clear that we have duties towards animals: they should not, for example, be subjected to unnecessary cruelty.

Attempts have been made, at the highest level, to ban certain blood sports, but without much success: when it comes to our hobbies and favourite indulgences preaching usually falls on deaf ears.

A very strong case can also be made, on ethical grounds, against cruel practices such as bullfighting, bear-baiting, and battery farming, where unnecessary suffering is inflicted on animals for reasons of profit or entertainment. But as a society, we are sadly inclined to ignore the inconvenience. Counter-snobbery plays a part here: fox hunting is definitely taboo, but nobody’s going to tell me and my mates that we can’t go fishing.

Is it any wonder that Vegans and others go to extremes? Are they trying to do what most of society has failed to do? The middle ground is always hardest: yes, we have obligations to nurture the world and its creatures, but whether we like it or not we are also its custodians.

Animals lack meta-intelligence: they cannot express feelings or nuances of thought. We are responsible for them in every sense, but the modern cult of pets signals both a worrying tendency to downplay our proper role and function, and a distortion of our priorities.

Please Think of the Children

When COVID-19 first hit the news nearly two years ago, the Save the Children Fund ran an advertisement that reported 30,000 “unnecessary” child deaths worldwide, per day, from poor nutrition and bad water. The annual total takes the breath away. It far exceeds even the highest estimate of COVID-19-related deaths.

Yet currently in Australia a lot more is being spent to save the koala from possible extinction and a lot more effort is going into the campaign to save the world from the putative effects of rising seas and carbon dioxide levels.

Any kind of child abuse is loathsome, but you can also abuse children passively, by inactivity or sloth or selfishness, by choosing not to see or just not caring.

I had hoped that the threat of COVID-19 might make us kinder. That a growing sense of uncertainty and risk in our privileged world might open our hearts a little more to the sufferings of others.

That when we said—as we did over and over again—“we’re all in this together” or “we’ll come through this,” we might have taken a slightly broader view of what it means to be human.

I assumed that the brief of the World Health Organisation might extend to children and that catastrophic hunger and physical deprivation might actually be seen as some kind of a health issue. Not nearly enough has been achieved.

Let’s dare to look more closely at another form of abuse—abortion. There was a time when we could persuade ourselves that an unborn child was just a thing, a piece of its mother’s tissue. We now know that’s not true. Trust the Science: let’s turn that catchcry around and admit that late-term abortion is cruel, monstrous, and supremely abusive.

You can find out what that procedure entails if you really try, but the mainstream media won’t help you. Many will speak up for the koala that finds its habitat threatened, but few will go to the barricades for the unwanted baby.

Further, organ harvesters have to guarantee the “freshness” of body parts. That means that the fetus has to be delivered alive, and the organs extracted with no anaesthesia while the heart is beating and blood is circulating. A society that allows that has lost its moral compass.

We’re not living in a fascist or communist dictatorship, and there’s no Hitler or Stalin in evidence, yet, to chivvy us along to that degraded state.

But there are dangerous signs of our growing subservience to the diktats of powerful governments that claim to offer us protection amidst the virtual silence of many in the mainstream media who give little quarter to those who speak against the prevailing narrative, and who fail to ask the really hard questions. Governments and lobby groups are getting away with too much.

So we continue to pick small, manageable targets for our opprobrium. We pull down statues but don’t storm the embassies of those countries that still blink at slavery. We want clean air and water, but don’t turn off our lights and air conditioners. And while all this is going on we ignore or connive at the deaths of countless more.

We, humans, are capable of boundless generosity and nobility. Yes, by all means, let us protect our koalas and possums and our coral reefs and their inhabitants. But we shouldn’t have to choose between them and the world’s children. We can, and must, strive for the good of all.