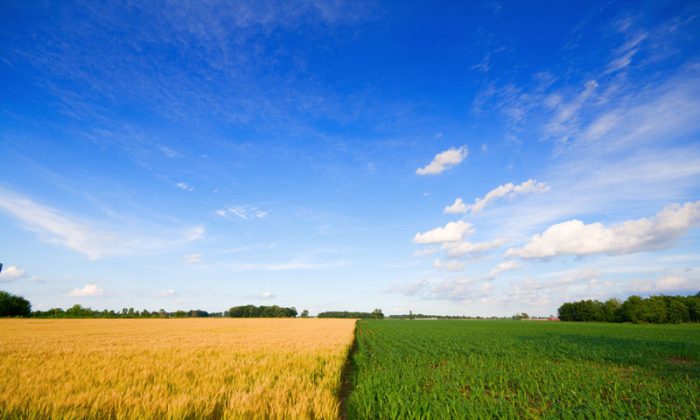 Are US Farmers ‘Pushing the Limits’ of the Corn Belt?

The United States produces 40 percent of the world’s corn, mostly in Iowa, Illinois, and Indiana. Many corn farmers don’t irrigate and depend on precipitation, air temperature, and humidity for optimal plant growth.

Over the last few decades, corn has been modified with new traits, like water-seeking roots and built-in pest resistance that allow farmers to plant seeds closer together in a field. As a result, yields have climbed steadily in typical years.

But in drought conditions, densely planted corn can suffer higher stress and produce lower yields, new research shows. In contrast, soybeans have not been planted more densely in recent decades and show no signs of increased sensitivity to drought, the report noted.

Drought conditions are expected to become even more challenging as temperatures continue to rise throughout the 21st century, the researchers says.

“Recent yield progress is overall a good news story. But because farm yields are improving fastest in favorable weather, the stakes for having such weather are rising. In other words,” says David Lobell, associate professor of environmental Earth system science at Stanford University, “the negative impacts of hot and dry weather are rising at the same time that climate change is expected to bring more such weather.”

Lobell says the “Corn Belt”—the region of Midwestern states where much of the country’s corn is grown—is “phenomenally productive. But in the past two decades we saw very small yield gains in non-irrigated corn under the hottest conditions. This suggests farmers may be pushing the limits of what’s possible under these conditions.”

Lobell predicts that at current levels of temperature sensitivity, crops could lose 15 percent of their yield within 50 years, or as much as 30 percent if crops continue the trend of becoming more sensitive over time.

The quest to maximize crop yields has been a driving force behind agricultural research as the world’s population grows and climate change puts pressure on global food production. One big challenge for climate science is whether crops can adapt to climate change by becoming less sensitive to hotter and drier weather.

“The data clearly indicate that drought stress for corn and soy comes partly from low rain, but even more so from hot and dry air. Plants have to trade water to get carbon from the air to grow, and the terms of that trade become much less favorable when it’s hot,” says Lobell, also the lead author for a chapter in the United Nation’s Intergovernmental Panel on Climate Change (IPCC) Fifth Assessment Report, which details a consensus view on the current state and fate of the world’s climate.

Lobell’s team examined an unprecedented amount of detailed field data from more than one million USDA crop insurance records between 1995 and 2012.

“The idea was pretty simple,” he says. “We determined which conditions really matter for corn and soy yields, and then tracked how farmers were doing at different levels of these conditions over time. But to do that well, you really need a lot of data, and this dataset was a beauty.”

Lobell says he hopes that the research can help inform researchers and policymakers so they can make better decisions.

“I think it’s exciting that data like this now exist to see what’s actually happening in fields. By taking advantage of this data, we can learn a lot fairly quickly,” he says. “Of course, our hope is to improve the situation. But these results challenge the idea that US agriculture will just easily adapt to climate changes because we invest a lot and are really high-tech.”

Lobell and colleagues are also looking at ways crops may perform better under increasingly hot conditions. “But I wouldn’t expect any miracles,” he says. “It will take targeted efforts, and even then gains could be modest. There’s only so much a plant can do when it is hot and dry.”

The study appears in the journal Science.

*Image of “wheat and corn” via Shutterstock