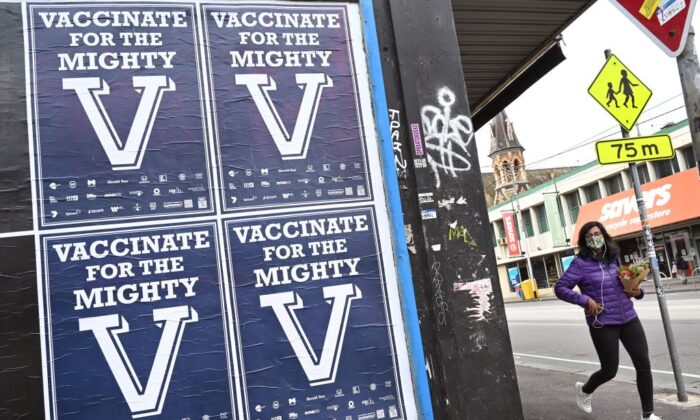 A person walks past posters encouraging people to get vaccinated in Melbourne, Australia on Aug. 31, 2021. (William West/AFP via Getty Images)
Viewpoints

Are the Unvaxxed the Enemy of the People?

“The principal task of the State today is to justify its own existence. To do so, it has to annihilate society’s capacity to survive by itself. Surreptitiously undermining all forms of spontaneous regulation, deregulating, desocializing, breaking down the traditional mechanisms of bodies and antibodies, in order to substitute its artificial mechanisms—such is the strategy of a State locked in a subtle struggle with society—exactly like medicine, which lives off the destruction of natural defences and their replacement by artificial ones.” —Jean Baudrillard

In Henrik Ibsen’s “An Enemy of the People,” his protagonist, Dr. Thomas Stockmann, exposes a bacterial-contamination-causing illness in the town’s famous spa water. Pressure mounts on him as his brother Peter, the mayor, warns of the social and financial effect of such a disclosure, and his father-in-law Morten Kiil, whose tannery is leaking the poisons causing the bacteria, buys him shares in the spa to ensure his family’s future security. Stockmann is undaunted. He condemns the “colossal stupidity of the authorities” and the small-mindedness of “the compact liberal majority” of the people.

The angered crowd reciprocates by denouncing him as the “enemy of the people.”

During the Canadian election, the media in Canada has followed the prime minister’s lead in venting its spleen against those who don’t consent to submitting to jabs as enemies of the people. This moral posturing has been echoed across the media spectrum, from the irresponsible hate speech of the Toronto Star to the National Post, where Jonathan Kay claimed “anti-vaxxer propaganda” not only caused deaths, but was tearing society apart.

Our elected officials, directed by the public health augurers reading the charts of R0 scores, have brought in measures to annihilate society’s capacity to survive by itself. It’s a mission creep that began as “15 days to flatten the curve” and was supposed to end with a vaccine with better antibodies than our natural immune systems.

But the principal task of the State has always been to justify its own existence. The endless series of bait-and-switches has always been aimed at protecting the public health care monopoly. ICU capacity could have been expanded to do that. The bureaucracy preferred totalitarian social measures.

The long-awaited bait of the mRNA shots was that they would end the unprecedented government overreach—the “new normal“—by protecting us from SARS-CoV2 and then returning us to the “old” normal.

We ought to be there now.

Either the shots protect people or they don’t. Either the authorities allow people to return to normal or they will not.

It appears they will not. The “new normal” is now just … normal.

It seems the government itself is the virus that has injected itself into everyone’s lives.

How about those who resist the idea that the “new normal” is normal? The “anti-vaxxers”? Are they “enemies of the people”?

The emergency should be over. But a state of managed emergency is the new normal, or it will be once every child is also finally vaxxed. That is now being advertised by the Canadian government in TV ads. So will the QR code monitoring system going forward. And these enhanced “security measures” will be added to the masking, social-distancing, and lockdown policies for everyone—including the “fully-vaccinated.”

What is the rationale for this next phase of the “new normal”? The need for herd immunity.

The level of vaccinations should already achieve that, if they were effective. The skyrocketing cases in strongly compliant countries with early double-vaccinations, such as Israel, Singapore, the UK, and Iceland, suggest they are not.

In fact, it’s those with natural immunity who have a 13 times greater immunity to the Delta variant. They aren’t an obstacle to normalcy. They aren’t the enemy of the people.

They are an obstacle to the State’s self-justification.

No, the actions of the State to justify its own existence are an ongoing psyops campaign. Living like prisoners has had a deleterious effect on people’s mental health. But the people’s approval also verifies the Stockholm Syndrome.

We are now living through a vast reenactment of the Milgram experiment. The aim of COVID’s “willing executioners” is “to make our lives as miserable as possible, to segregate us, stigmatize us, demonize us, bully, and harass us, and pressure us to conform at every turn,” according to playwright C.J. Hopkins.

“Willing executioners” are found in the families who refuse to see or talk to their nearest and dearest if they haven’t had the jab. They are in churches that mandate double-vaxxes to attend. They are in companies that have mandated vaccines as a condition of employment. They run the universities and colleges that flatly contradict their own research ethics policies. They administrate the hospitals now trashing the Nuremberg Code. They direct the funding of science, at the expense of science.

These terrorized people act as if those who drive without seatbelts are putting them all at risk of a fatal collision.

How have they come to such an absurd conclusion?

Someone who can impose their will on you without your consent has made you a slave.

As Karl Popper said in “The Open Society and Its Enemies,” “We must plan for freedom, and not only for security, if for no other reason than only freedom can make security more secure.”

Scott Masson
Follow
Scott Masson is a public intellectual and an associate professor of English literature. For more information on Masson, visit ScottMasson.ca and YouTube.com/c/DrScottMasson