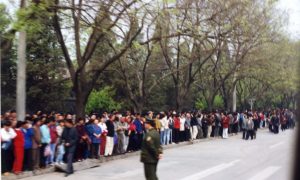 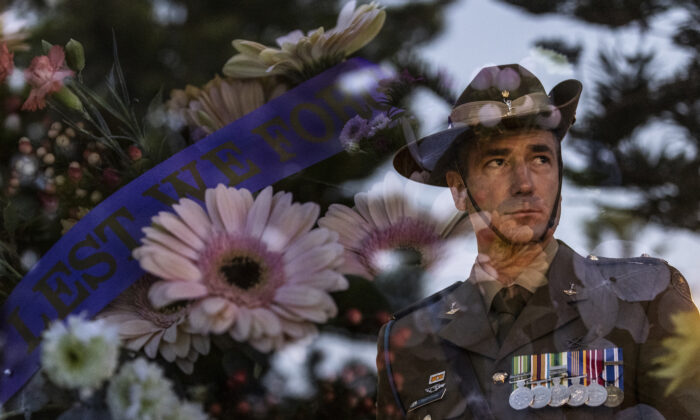 A service member is pictured at the Coogee Dawn Service in Sydney, Australia, on April 25, 2021. (Brook Mitchell/Getty Images)
The Reader's Turn

Are the ANZACs Still Willing to Pay the Price of Freedom?

Freedom of Speech, freedom to worship, to assemble, and to share ideas openly are the greatest prizes of Western Civilisation, envied by many other nations. These freedoms are the result of centuries of spiritual development and social struggle by people dedicated to push back the dark forces that inhabit the human soul.

The spiritual roots of the West’s freedoms flow from the Moral Teachings of Jesus Christ. Western traditions incorporate philosophical ideas from the Greeks, political organisation from the Romans, and respect for the individual as developed in British and European culture.

Only the constant exercise of moral courage and sacrifice of brave men and women can keep the precious flower of Freedom blooming in a dangerous world. Many heroes and heroines block the advance of tyrants and dictators, often at the cost of their lives. Therefore, we have an ongoing duty to actively cultivate and to protect the spirit of freedom and responsibility in our families and communities.

In recent years, the Falun Dafa members—refugees from the tyranny of the Chinese Communist Party (CCP)—arrived in New Zealand. They fled here to access the protection of our free society, so they can practice their religion and enjoy a peaceful life, away from Chinese communist persecution and interference. Unfortunately, the New Zealand government is now influenced by Communist Chinese power, money, and moral corruption. They have opened wide the doors of immigration to allow the CCP’s agents of tyranny to enter, and to threaten the peaceful Falun Dafa practitioners.

Back in 1999, on April 25, the Falun Dafa members suffered their first major incident of persecution and brutality under the Chinese communist dictatorship. Since then, the CCP’s persecution has intensified into a state-sponsored war on its citizens. That shameful April day in China coincides with the date that New Zealanders remember our ANZAC military members, who sacrificed their lives in two World Wars, fighting against tyrants and dictators.

“ANZAC” means the Australian and New Zealand Armed Corps, the men and women who gave their lives to defeat the enemies of Freedom. We remember them because they served the highest ideals of courage, honour, and duty from a heart of willing sacrifice. When New Zealanders (and Australians) celebrate ANZAC Day, April 25, we must remind ourselves that this world remains a dangerous place. The example of the persecuted Falun Dafa teaches us to strongly oppose dictators, to support the innocent, and to protect our Freedoms, even with our lives.

Today, the good-hearted Falun Dafa practitioners call out in alarm to New Zealanders. They testify to the horrific crimes, human rights violations, and warn us of the satanic nature of the Chinese Communist Party. I hope that more Kiwis will stop, listen, and learn from these innocent people, who present the truth about the CCP and its diabolical agenda for world domination.

The Falun Dafa group provides credible warnings that call New Zealanders to wake up to imminent danger. There is a two-faced Communist enemy penetrating our peaceful nation. The CCP claims innocence but its heart is guilty of deep moral evil, and its hands are stained with blood from the worst of crimes. The CCP supervises the theft of vital organs cut from the living bodies of the Chinese Falun Dafa members, and permits the sale of these body parts in a billion-dollar industry supplying sick rich people with organ transplants.

The Chinese Communist Party consumes the hearts, minds, and bodies of the Chinese people and their children. Then vampire-like, it slides out to feast on the rest of humankind.

People of New Zealand, please wake up. Take heed from the warnings of the Falun Dafa practitioners, for they represent the best features of the Chinese spirit. Learn from their testimony. Then, take proper ANZAC-style action to rid the world of this Maoist-communist disease.

To reject and expel the CCP is to ensure the safety of our country and to preserve its precious flower of Freedom.