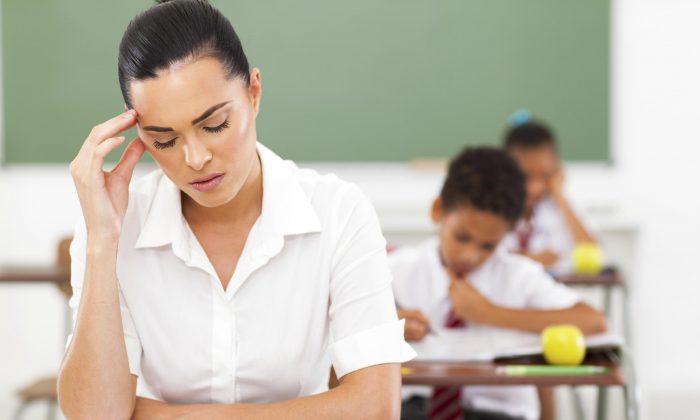 Is it worth all this? (Michaeljung/iStock)
Education

Are Teachers Suffering From a Crisis of Motivation?

The National Union of Teachers has published results of a survey in which 53 percent of teachers in England and 46 percent in Wales said they were: “thinking of leaving the profession in the next two years.” The NUT argues that misguided government policy is increasingly the root cause of teachers’ misery and has led to this collapse in morale.

Some will argue, quite sensibly, that it’s important not to panic in response to such surveys—the NUT results were from an online YouGov poll of 1,020 primary and secondary teachers in England. Those who agreed that they’re “thinking of leaving [the] profession in the next two years” won’t necessarily go on to quit.

The schools minister, Nick Gibb, certainly doesn’t see a need to be overly concerned. He suggested that teaching remains an extremely popular profession—record numbers of people are joining the profession and there has been a linear increase in the number of teachers over the last five years.

But that’s not the point. The NUT survey also suggested that more than two-thirds of teachers felt that morale had declined in the past five years and 73 percent felt that current policy was narrow, restrictive, and uncreative. When more than half of those charged with educating and inspiring children and young people say they might want to leave their profession, then there’s certainly something to be concerned about.

I would argue that it reflects an emerging “motivational crisis” in teaching. Lots and lots of teachers are telling us, quite simply, that they don’t like doing their job enough to say that they want to keep doing it. This is not just the odd teacher—it hints at a systematic motivational problem.

The psychology of human motivation has taught us that when it feels like doing a job is a reward in itself, people approach their work with the greatest enthusiasm, passion, and commitment—and they derive the greatest satisfaction from it. But this doesn’t just happen—as research into the psychology of motivation has demonstrated, feeling as though work is intrinsically rewarding depends upon whether the environment nourishes our basic psychological needs. These are the need to feel:

Decades of research shows that if these key psychological needs are not supported by working environments then people are less likely to experience work as intrinsically rewarding or to experience personal growth and meaning from the work that they do. They are also ultimately more likely to disengage from it. In education, I have found growing evidence from my own research that when teachers’ basic psychological needs are suffocated, this translates into dampened interest and enthusiasm from pupils.

So, when significant numbers of teachers tell us they are considering leaving the profession, we ought to consider it a motivational concern. And one of our reactions should be to carefully consider the extent to which we offer them a working environment that respects their needs as human beings. We simply aren’t doing this. In fact, there is every reason to believe that current educational policy is systematically stifling people’s psychological needs.

As an example, one study clearly demonstrated how a system narrowly focused upon pupil achievement and standardized testing had invaded teachers working lives so much that they had been completely robbed of any sense of personal autonomy. As one teacher suggested: “I’m not the teacher I used to be. I couldn’t wait to get to school every day because I loved being great at what I do. All of the most powerful teaching tools I used to use every day are no good to me now because they don’t help children get ready for the test, and it makes me like a robot instead of a teacher. I didn’t need a degree to do what I do now. They don’t need real teachers to prepare children for tests and, in fact, I think they could just develop computer programs to do this.”

As a psychologist and educationalist, my greatest fear is that we have created a one-dimensional education system. It is so intensely focused upon standards, metrics, and a production line that it neglects to allow people to lead personally meaningful lives, to trust and value them for who they are, and celebrate what they bring to the classroom. For this, individuals pay a heavy motivational and emotional price.

Sam Carr, Lecturer in Education, University of Bath. This article was previously published on TheConversation.com