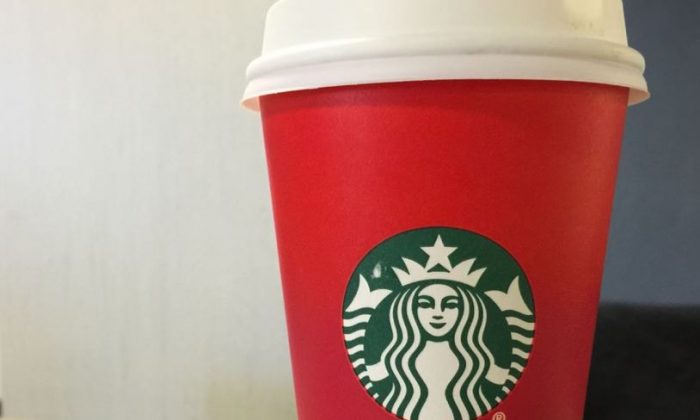 The Epoch Times
US

Some Are Claiming Starbucks’ New Red Cups Are ‘Anti-Christmas’

The holiday season is here, and Starbucks has changed its cups to a festive, red color. But many people, including Christians, aren’t happy with the cups.

Some people went on social media to protest the new cup, which is just a plain red color with the Starbucks logo in the center. The cup is devoid of images of Christmas, including snowflakes, trees, and ornaments.

“Starbucks REMOVED CHRISTMAS from their cups,” wrote Joshua Feuerstein in a viral Facebook post. He claimed that Starbucks won’t let its employees say “Merry Christmas,” and he encouraged customers to give their names as “Merry Christmas” to force them to say the phrase.

Starbucks Vice President Jeffrey Fields said this year’s design is a “more open way to usher in the holidays.”

I doubt Jesus would be mad about a coffee cup. Don't we have biggest issues to deal with? #MerryChristmas #starbucks #StarbucksRedCup

“Starbucks has become a place of sanctuary during the holidays,” he wrote in a press release. “We’re embracing the simplicity and the quietness of it.”

Some politicians have also criticized the cup.

MP David Burrowes, a conservative of the British Parliament, slammed Starbucks, according to a statement he gave to Breitbart London.

Noted conservative commentator and former U.S. Rep. Allen West’s website reported that some Christians are claiming Starbucks has carried out a “Christian cleansing” due to the red cups.

However, the suggestion that Starbucks is anti-Christmas isn’t all that credible. According to Snopes, the hoax-debunking website, the chain sells “Christmas Blend” coffee and Advent calendars.

I am a Christian. I am not in any way offended by Starbucks cups. I am offended by: violence. Racism. Abuse. Discrimination. Cups? No.

“The Starbucks coffee cup change smells more of political correctness than a consumer-led change.” Burrowes noted, “The public has a common sense grasp on the reality that at Christmas time, whether you have a Christian faith or not, Britain celebrates Christmas.”