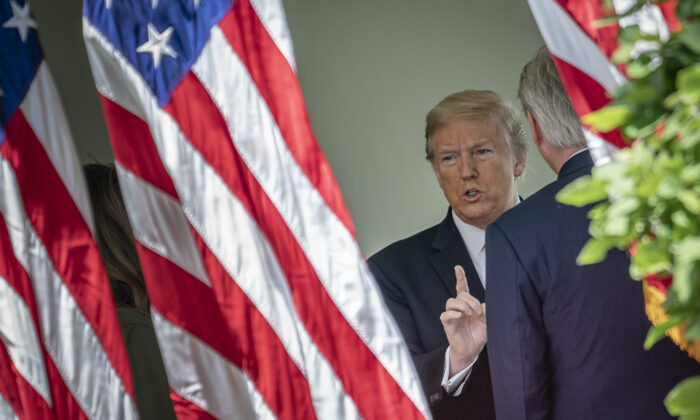 Are Republicans Up for Election Really Frightened of Donald Trump?

Writing in The Wall Street Journal on May 3, Gerard Baker lamented the fact that, as he saw it, “GOP Leaders Remain Shackled to Donald Trump.”

The occasion for his regret was the discovery of an audiotape from January of last year in which House Minority Leader Kevin McCarthy (R-Calif.), who now hopes to replace Nancy Pelosi as Speaker next year, was recorded as having said what he claimed not to have said, namely, had told other Republican leaders shortly after the Jan. 6, 2021, breach of the U.S. Capitol that he was going to tell President Donald Trump that he would be impeached and should resign.

It was certainly an embarrassment for McCarthy, though, in their context, his words made it clear that he was only gauging what he took to be the anti-Trump feeling in the House and the Republican caucus at the time, judging that impeachment would be successful, and urging (or planning to urge) the president to resign—a few days before his term was to end anyway, so as to get out ahead of it.

If so, it shouldn’t have been surprising if he changed his mind about this in pretty short order, especially when he saw the lengths to which the Democrats were prepared to go to turn the events of Jan. 6 and subsequent impeachment to their partisan advantage, as they have been doing ever since.

By setting up the January 6 committee to keep public attention on what they took to calling, with typical hyperbole, the “insurrection” by Trump supporters in the Capitol and exploiting for partisan purposes renegade Republicans such as Liz Cheney, the Democrats put the price for any Republican leader to play a statesmanlike role up far too high—though, to be fair to Cheney, she’s willing to pay it.

That’s not how Baker saw it, however. To him, as with many other commentators on these events, the GOP leader had to have been intimidated by Trump into going back on his word and knuckling under.

In fact, to hear Baker tell it, McCarthy’s putative cowardice in backing away from a supposedly firm purpose of confrontation with the president is merely symptomatic of a “fundamental dishonesty at the heart of the relationship between the Republican Party and Mr. Trump himself.”

In his view, virtually the whole Republican Party, “with the exception of a few demented types in Congress and the media,” must be equally cowardly. All but the “demented” few are presumed to despise Trump, to deny his claims of a stolen election, and to ardently wish for almost anyone else to lead the party in 2024.

“The prayerful, desperate hope of most of them,” wrote Baker, “is that somehow he doesn’t run again in 2024, a wish that every day looks less likely to be fulfilled. Some of them hope, with or without malice, that he might be too old or somehow physically incapacitated from running again.”

Yet no more than McCarthy are they willing to say any of this in public. “They dare not risk his wrath or the retribution of voters for whom the man, not the party, is what matters.”

Baker seems to be flirting here with a view of the Republican Party that has been widespread among the lesser punditry for six years now. Because these savants despise Trump themselves, they cannot imagine any sane or reasonable or decent person who does not share their feelings.

It must follow, then, that any Republican who doesn’t repudiate their party’s titular head must either be “demented” himself or too much afraid of him to do so.

It’s a kind of moral psychologizing with which we have become all too familiar since a poll of psychiatrists in 1964 pronounced that year’s Republican nominee, Barry Goldwater, mentally unfit for the presidency.

Subsequently, the American Psychiatric Association announced what it called the “Goldwater rule, which held that it was unethical for any psychiatrist-member to give a professional opinion about the mental state of a public figure whom he or she had not examined, or who had not given permission to discuss his or her mental health in public.

With the Trump presidency, the Goldwater rule broke down completely. Though the APA officially kept the rule as part of its ethical guidelines for members, psychiatrists and psychologists who were members of rival organizations didn’t consider themselves bound by it and openly flouted it, to the delight of the media and the Democrats.

During the 2019 impeachment proceedings in the House against Trump, some 350 mental health professionals petitioned the House Judiciary Committee to consider the president’s “brittle sense of self-worth” which “could lead to catastrophic outcomes.”

We now know that Gen. Mark Milley made a similar diagnosis of the president’s mental state independently, and without the benefit of professional advice, which he shared with his Chinese counterparts.

The point of such psychologizing is always to put someone else in the wrong without troubling oneself to answer his arguments or dispute his judgments. As an ever-reliable debate stopper, one side’s calling the other crazy (or else cowardly for being afraid to say what they really think) can’t be beat.

It’s the same dynamic at work in the Democrats’ overplaying of their hand about Jan. 6—and about everything else concerning Trump and the Republican Party he still pretty obviously heads.

First, you decide, with or without the help of professional advice, that you’d have to be crazy to believe that the election was stolen. Then, you assert that anyone who believes it and who is not obviously crazy, must be using it as a mere pretext for a “coup” or an “insurrection.”

Finally, anyone who doesn’t agree with this peculiar reasoning, like Kevin McCarthy, must be too much frightened of Trump to submit to its inarguable logic.

The standing ovation given to McCarthy by the House Republican caucus on April 27 suggests that his party colleagues aren’t buying it, however. And I doubt that a majority of Americans are buying it either.