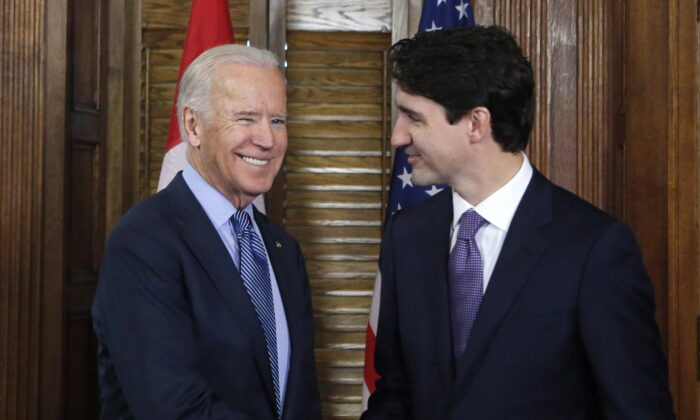 U.S. President Joe Biden and Canadian Prime Minister Justin Trudeau appear to be doing all they can to advance the Chinese Communist Party in its goal of replacing the United States as the premier superpower and establishing Chinese world domination. Every policy of the two leaders weakens their own countries and the free world.

Contemporary developed society is built on available and inexpensive energy. Everything depends on energy, from travel, transport, and communications to manufacturing and home heating. Both the United States and Canada are exceptionally rich in hydrocarbon resources, available through the genius of advanced technology.

Prior to the Biden administration, the United States was energy independent, the world leader in petroleum production, and an energy exporter. Prior to the Trudeau government, Canada had a vibrant oil industry with the prospect of vast exports across the Pacific.

Both Biden and Trudeau made the destruction of the petroleum industry the centerpiece of their policies. This was explained as a response to the “existential threat” that climate change presented to “life on earth,” as American Democratic politicians and media repeated ad infinitum, even if they didn’t all endorse the claim that we have only 12 years to live.

Our leaders responded with the cancellation of pipelines, the imposition of highly restrictive regulations on oil production, and the levying of extortionate taxes on oil. In response, the industry hunkered down or decamped entirely, putting an end to U.S. energy independence and strangling the Canadian oil export business. The price of oil shot up and spurred inflation throughout the two economies.

The authority cited for this “existential threat” claim, the U.N. Intergovernmental Panel on Climate Change (IPCC), doesn’t back up the claim in its reports (as opposed to the sensationalist media reports about the IPCC reports).

What the IPCC does say is much more measured and limited, as reported in detail in the authoritative accounts “Fake Invisible Catastrophes and Threats of Doom” by ecologist Patrick Moore, a founder of Greenpeace; “Unsettled: What Climate Science Tells Us, What It Doesn’t, and Why It Matters” by Steven E. Koonin, past undersecretary for science in the Obama administration’s U.S. Department of Energy; and “False Alarm: How Climate Change Panic Costs Us Trillions, Hurts the Poor, Fails to Fix the Planet” by Bjorn Lomborg, a past president of the Copenhagen Consensus think tank.

But Biden and Trudeau, along with many leaders of developed countries around the world, have used the threat of environmental disaster to impose greater control over their populations and to reduce the freedom of individuals and organizations to act in their own and the collective interest.

Their plan is to replace cheap, effective hydrocarbons, and atomic power as well, with “clean, renewable” energy from solar panels and wind turbines. Unfortunately, these technologies are incapable of providing any more than a minute fraction of the energy needed, currently providing around 12 percent, if society isn’t going to regress to the pre-industrial age.

The leaders are also enthused about electric cars, in spite of the great environmental damage required to build them, and even though there’s no power grid to charge them without hydrocarbons such as coal, which with atomic energy currently provide up to 80 percent of the power for electricity.

So Biden and Trudeau, by undercutting and blocking our petroleum industries, have nullified the massive advantage over China of vast critical energy resources. In doing so, they have also deprived our European allies of access to reasonably priced and reliable energy resources. The Europeans, especially Germany, have shown the futility of the “transition” to green energy, which has turned out to be the transition to no energy. Germany, for one, has pivoted back to coal.

Not satisfied with destroying one of the main pillars of economic prosperity and political independence, Biden and Trudeau have turned to attacking another main pillar, agriculture. Never mind the importance of North American agriculture to the world food supply, Biden and Trudeau have followed the path of Sri Lanka in beginning to ban fertilizers and livestock, on the compelling theory that cow flatulence is an “existential threat to the planet.”

Did they notice, I wonder, that Sri Lanka’s agriculture production collapsed, causing a man-made food shortage among the population, as well as bankrupting the country over a lack of agricultural exports? But don’t worry, they have a plan: Eating meat is to be replaced by eating insects. I’m sure they will be the first to adopt this new diet.

Not satisfied with shutting down two industries necessary to maintain prosperity, our leaders have set their next goal on destroying U.S. and Canadian human capital. They have done this not in the name of saving the planet, but in the name of “social justice.” On the false pretext of our countries being “systemically racist,” they have by executive rule and order canceled meritocracy, ignored achievement and potential, and replaced them with racist and sexist quotas, glossed as “diversity, equity, and inclusion.”

“Diversity” in practice means favoring certain races, ethnicities, sexes, and sexualities and disfavoring and excluding others, particularly the majority race in both countries, and the half of the population that is the “wrong” sex. “Equity” means forced equality of results irrespective of performance, and the suppression of superior performance. “Inclusion” means never raising any questions that might offend the identities and special interests of preferred categories of people, lest they feel “unsafe” and insulted. This new form of racism and sexism masquerades as “social justice.”

These impositions have guaranteed that the most intelligent and most capable people are sidelined and are replaced by people of inferior achievement and capability. In our countries today, university professors, lawyers, doctors, engineers, airline pilots, generals and admirals, accountants, scientists, soldiers, dentists, business executives, board members, judges, and government appointees of all kinds are diversity candidates, selected with little regard for competence.

What do you think about your surgeon, airline pilot, or lawyer having been qualified on the basis of race, sex, and sexuality rather than on capability and competence?

The OECD said in the 2015 results of the Program for International Student Assessment that Canada ranks seventh in science, ninth in mathematics, and third in reading compared to other countries, while the United States is 24th in science, 38th in mathematics, and 24th in reading. This better showing for Canada won’t last long under the Trudeau commitment to DEI mediocrity.

Meanwhile, the United States won’t be able to maintain its current mediocre level with Biden’s push in schools to sideline competence and to replace academic subjects with “anti-racism” and “trans” ideologies. This is a bleak picture for countries that wish to maintain leadership in the world.

Finally, following the Latin guideline “divide and conquer,” Biden and Trudeau have divided their countries, making them that much easier for China to conquer. Biden came into office claiming to unify the country, but immediately labeled the Trump half of the electorate as “white supremacists” and “domestic terrorists,” and set his security agencies to jail demonstrators at the Capitol, calling those who offended by trespassing “insurrectionists.”

Imprisoning Biden’s political opponents was an exception, since, across the country, Democratic prosecutors released violent repeat offenders with no penalty. The FBI was directed to target parents who complained at school board meetings as “domestic terrorists.” Biden gutted the military, first with a witch hunt for “white supremacists” and then by firing those who refused the unnecessary and potentially dangerous COVID-19 “vaccine.” The Chinese military must have been elated.

Trudeau, even while he has silenced the media with taxpayers’ money, imposed draconian COVID-19 mandates, strangling travel and blocking entry and exit, and has maintained them with increasing ferocity while most other countries, other than China, have relaxed or canceled theirs.

The heroes of the Canadian COVID economy—the truck drivers who carried food and fuel across the country as others cowered in lockdowns—were tangled with onerous cross-border COVID policies. When they protested peacefully, breaking only parking regulations, Trudeau attacked them as anti-Semitic, Islamophobic, anti-black (even the black truckers), homophobes, and transphobes, claiming that they were a “fringe minority,” and likened them to Nazis.

If that weren’t enough, he invoked the War Measures Act (now called the Emergencies Act) to use martial law powers to suppress the peaceful demonstration. The country is now divided between the followers of the Liberal Party of Trudeau and the majority who despise Trudeau and his enablers.

If they were paid secret agents of the Chinese Communist Party, Biden and Trudeau couldn’t have done more to guarantee China’s triumph over the United States and Canada, and the West.