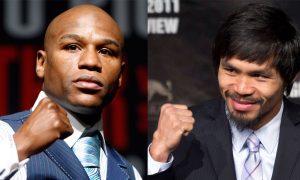 Are Pacquiao’s Shoulder Complaints Convincing Enough to Get a Mayweather Rematch?

Feeling robbed after forking over $100 to watch the Mayweather/Pacquiao fight? Maybe if Pacquiao’s shoulder wasn’t injured the fight would have come closer to matching the immense hype.

According to an interview on rappler.com the injury was a torn rotator cuff and it happened roughly a month ago during a sparring session. Doctors told him to rest the shoulder for 30–40 days.

Pacquiao was denied a numbing injection by the Nevada Athletic Commission (NAC) before the fight, which said the request came too late.

But according to rappler.com, Pacquiao (57–6–2) said the NAC approved his use of a numbing injection two weeks before the fight, only to be told differently on fight night.

According to NAC Chairman Francisco Aguilar, they were aware of the request for an injection but no injuries were disclosed to them at the weigh-in or on the medical questionnaire.

Pacquiao claims he was limited by the injury.

“I really needed that shot because if I throw a power hook or power jab, it hurt,” Pacquiao told reporters, according to rappler.

The popular 36-year-old Filipino boxer had contemplated postponing the fight but decided against it believing the numbing agent would be enough. He also didn’t want to disappoint the fans.

.@MannyPacquiao today in his hotel room. He injured his right shoulder sparring in training camp. It hasn’t healed. pic.twitter.com/eQtXjH0DLw

“The thing is, kumbaga, ayokong madismaya yung mga fans, madismaya na malapit na (I didn’t want to dismay the fans that it was so close) 3 weeks before the fight,” he said.

Pacquiao also maintains that a leak somewhere about his injury reached Floyd Mayweather (48–0).

Although a rematch hasn’t been scheduled, Pacquiao is in favor of one.

“I want a rematch if he wants. I wasn’t 100 percent ready for last night because of this shoulder but I don’t want to use that complaining that I lost the fight. I’m just accepting the fact that I lost.”