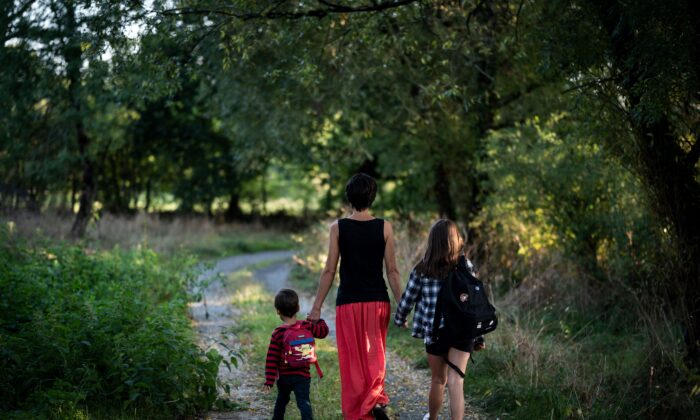 A mother walks toward school with her children in Lavau-sur-Loire, western France on Sept. 2, 2021 (Loic Venance/AFP via Getty Images)
Viewpoints

Are Our Children a Means to an End?

I recently read a fascinating ethics consult about the topic of savior siblings. A savior sibling refers to the creation of a genetically matched embryo that will be implanted, and after birth used to be the savior of a sick sibling in need of a donor.

Typically, the savior sibling provides bone marrow or stem cells from the umbilical cord blood, which is collected at birth and then transfused into the child who is ill and in need of a donor. The savior sibling may be needed once for the medical treatment of their sick sibling or on a repeated basis if needed.

The creation of the savior sibling takes place in the laboratory. Eggs are harvested from the mother. Sperm is collected from the father. Embryos are created in the lab and through pre-implantation genetic diagnostic testing (PGD), the embryos are screened and the embryo that is the genetic match for the sick sibling is implanted into the mother’s womb. The other embryos are typically discarded as they aren’t a suitable match.

This ethics consult asked first the question, “Is it ethical to help a family conceive a child whom they would give up for adoption to their neighbors, but use for marrow donation when the child is physically old enough?” The poll showed that 32 percent said it was ethical and 68 percent said it wasn’t. So, in this particular case, the savior sibling was to be given to adoption at birth but used for their genetic material.

More often, the parents keep their child as was the case of Adam Nash, the first savior sibling born in the United States in 2000 to Jack and Lisa Nash. Adam was born to rescue his sister Mollie, who had been diagnosed with Fanconi’s anemia, a rare genetically inherited disease.

If not for a genetic match through donation, Mollie would have died. Now, 21 years later, the Nashes have no regret on their decision and used in vitro fertilization (IVF) and PGD to have Adam. They have since gone onto have another child via IVF and PGD, who wasn’t born with the genetic disease.

But back to the ethics. In the case of the Nash family, 30 embryos were created, and four rounds of IVF were required for Lisa to get pregnant and deliver Adam, a healthy baby boy without the gene that causes Fanconi’s anemia.

But what happened to the other embryos? Were they tested and found to be defective and therefore discarded or used in research? Did they end up in frozen storage, still awaiting their fate?

And what about other uses of creating and designing our children for other reasons, not only to save the life of another child in need? The use of sex-selected IVF is already mainstream with people using IVF and PGD to choose their child because they prefer a boy over a girl.

Whether we look for moral guidance from our religious texts or to secular historical documents, it’s important that we remain rooted in the belief in the inherent dignity of all persons.

The U.N. Declaration on Human Rights warns that wherever there is “disregard and contempt for human rights,” “barbarous acts” are sure to follow. Surely, the rights of the savior sibling have been denied when from their first breath they are being used as a means to our particular end.