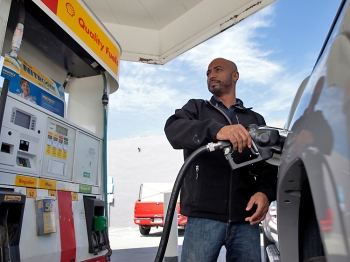 LOWER PRICES COMING: Samuel Lamb of San Jose, Calif. fills his truck with gasoline at a Shell gas station on April 27 in San Francisco. Gas prices nationally are expected to come down over the next few weeks as crude oil prices have plummeted. ( David Paul Morris/Getty Images )
Business & Economy

Are Lower Gas Prices on the Horizon?

Crude oil, which began last week as high as $115 per barrel, ended the week at $97.20 per barrel, a 15 percent drop in a span of five days. Last Thursday crude oil futures dropped 10 percent in one of the biggest one-day drops on record.

A surging U.S. dollar is the main cause for the decline in crude prices, which followed declines in other commodities, notably silver and gold. Investors also estimated a drop in demand for gasoline from U.S. consumers due to skyrocketing sales of small, gas-efficient vehicles in the first quarter of 2011.

Experts predict that the lower crude oil prices will eventually translate to lower spending at the pump, but exactly how much and how quickly is still up for debate.

“Memorial Day weekend, the unofficial start of summer, less than three weeks away, some analysts believe we have seen the gas price peak for the season, just shy of the $4.00 mark,” said motorist group AAA-Mid Atlantic in a statement.

Currently, more than 13 U.S. states have average fuel prices of more than $4.00 per gallon, with California being the highest. The national average dropped just a shade under $4.00 last week, to $3.97, AAA estimated.

"It's going to be $3.50 per gallon this summer," oil analyst Andrew Lipow said in a CNBC interview, citing a decline of 50 cents per gallon of fuel.

"At the very least, you can expect prices to fall 40 cents or so over the next several months."

"We've got high gas prices that have been eating away at your paychecks and that is a headwind that we've got to confront," Obama said in published remarks while visiting an automobile factory in Indiana last Friday.

Obama in recent weeks has lashed out against big oil companies—which recorded record profits in the last quarter—and their tax breaks, and began an investigation into market speculators who some believe contributed to the recent surge in crude oil prices.

Tax breaks for big oil should end, “especially at a time when we're scouring every part of the budget to try to figure out how we can bring down our deficit and our debt,” Obama declared.

U.S. Attorney General Eric Holder said over the weekend that his office will work with state attorneys general to ensure that gas stations will pass the savings of low oil prices to consumers as quickly as they raised them.