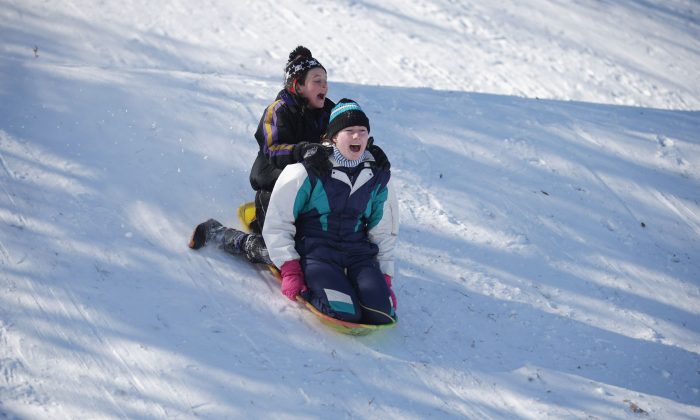 Are Kids Forgetting How to Play?

Play has been called “the business of childhood,” but with an increasing lack of free, unstructured time outdoors, kids are simply forgetting how to play, says an Ontario teacher consultant.

In the not-too-distant past, it was common to see kids playing outside. These days, however, it seems most children would rather stay indoors and get their entertainment from computers or other electronics.

“There’s a bit of a challenge with electronics these days,” says Sharon Seslija, a health and physical education consultant at Greater Essex County District School Board in Windsor.

“Even in my own neighbourhood, it’s like a desert out there—you just don’t see the kids outside.”

Besides spending an increased amount of time in front of various screens, Seslijia says other reasons why children aren’t getting outside as much include being over-scheduled in after-school activities, a lack of quality outdoor play space in urban areas, and parents’ fear that kids may get abducted or harmed if they play outside.

“We’re starting to see that kids don’t know how to play,” she says, noting that play—particularly unsupervised outdoor play—has an important role in children’s development.

This lack of outdoor playtime may be affecting childhood development, according to experts.

Studies show that in addition to the physical benefits of exercise, outdoor play and exposure to the natural world or “green space” has a number of cognitive, emotional, and social development benefits.

Play has been shown to improve and foster motor function, creativity, decision-making, problem-solving, social skills, control emotions, and helps develop speech in preschoolers. It also allows youngsters to try new things, test boundaries, and learn from their mistakes in a safe environment.

Only 5 percent of kids meet the Canadian Physical Activity Guidelines of 60 minutes of physical activity per day, according to Active Healthy Kids Canada. In addition, 46 percent of children get less than three hours of active play per week.

“If one is not outside and moving and exercising, then of course we see rising rates of obesity in our young kids, and increases in mental health issues—anxiety, depression, all that stuff,” says Seslijia.

“Kids are not learning how to use their imaginations, and decision-making, problem-solving skills, and collaborative play are not being developed to their full extent.”

‘Everyone has to contribute’

Schools have started to notice the phenomenon and programs have been popping up to get kids outside, but the problem needs a more proactive, community-wide solution, says Seslijia.

“It’s much bigger than what the schools can do. This is one of those issues where everyone has to contribute,” she said.

“It would be great to see the police department saying, ‘Send your kids outside to play, our streets are safe. Crime statistics are down. It’s OK to go outside and play.’ It would be good for our Department of Health, our health units to promote [outdoor play]—to get that message to the parents.”

According to Active Healthy Kids Canada’s 2013 annual report card, the federal government has started to take note of the need to include active living initiatives in policy and funding.

The report card gave the government’s strategies on active living a “C-” grade for 2013, up from “D” in 2012. Government investments were also ranked “C-,” up from “F” in the last three consecutive years.

Several factors contributed to the improved grades, said the report card. These include greater commitment from provincial and territorial ministers to increase health-enhancing initiatives in their jurisdictions; improved funding for active transportation infrastructure; increased federal funding to Sport Canada and the 2015 Pan American games; and endorsements of the Canadian Sport Policy 2.0.

Active Healthy Kids Canada recommended that the government follow the lead of many other countries and develop a national action plan on physical activity promotion.

“The federal government should continue to increase the priority of physical activity across several government departments including sport, health, transportation, and environment,” the report said.