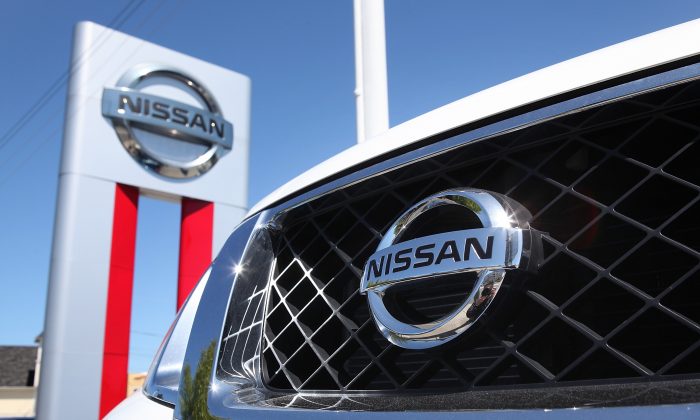 The Nissan logo is seen on the front of a brand new Nissan SUV at a Nissan dealership in Millbrae, Calif., on May 12, 2011. (Justin Sullivan/Getty Images)
Business & Economy

Two of Japan’s automakers have admitted to providing fuel economy data discrepancies in 2016, which widened the fuel efficiency testing scandal that rocked Volkswagen AG back in September 2015. In April 2016, Mitsubishi Motors Corporation revealed that it had been manipulating its fuel efficiency testing data, which sent the stock price down over 50 percent in just five trading days.

After Mitsubishi’s scandal broke, Japan’s transport ministry ordered Mitsubishi and other Japanese automotive manufacturers to submit fuel economy test data. Just a few weeks after Mitsubishi’s scandal was publicized, Suzuki Motor Corporation admitted that it had used improper testing methods, but strongly denied that it cheated on fuel efficiency tests. On May 18, 2016, Suzuki Motor’s stock price fell 15 percent at one point, the day the news broke, but it rebounded slightly and ended the day down just under 10 percent.

Since these scandals have come to light, there may be increased regulations in the automotive manufacturing industry and Mitsubishi and Suzuki may face substantial fines. However, these scandals may cause alliances between automakers in Japan, such as the alliance that is forming between Nissan Motor Company and Mitsubishi. The alliances would be beneficial to some companies and may help boost sales in some Japanese automakers with small market shares.

Mitsubishi Motors announced it altered the tire rolling resistance and aerodynamic drag data of four minicar models that were in production since 2013. The false air and tire resistance data provided to the Japanese transport ministry for government tests to certify the fuel efficiency. The manipulated data caused the fuel efficiency of over 600,000 minicars to be overstated between 5 percent and 10 percent.

Production and sales of the four minicar models, eK Space, eK Wagon, and Nissan’s Dayz and Dayz Roox, have been halted since the scandal broadened in April. However, since the fuel efficiency problem does not affect consumer safety, Mitsubishi Motors is not expected to recall the vehicles. Japan’s Transport Minister, Keiichi Ishii encouraged Mitsubishi to examine the possibility of buying back the minicars that had their fuel efficiency overstated. Additionally, the Japanese government may ask the company to pay for any subsidies that were granted to consumers.

In May 2016, the president of Mitsubishi announced that he would resign and take the responsibility for overstating the fuel efficiency in over 600,000 cars. The president’s resignation would help to combat Mitsubishi’s poor corporate governance, which has caused multiple problems and hurt its reputation over the past 16 years.

On May 25, 2016, Mitsubishi restated its earnings and booked a $174 million charge. However, based on the USD/JPY exchange rate on May 25, 2016, Mitsubishi still has $4.12 billion in cash and deposits and relatively low debt, which indicates that Mitsubishi should be able to weather the potential damages. However, its brand may be tarnished, and the company may face weaker demands over the short term. Mitsubishi’s stock price is down over 40 percent YTD, as of May 25, 2016, but may see a bounce after Nissan Motor Corporation, one of the largest Japanese automakers, announced that it planned to acquire a 34 percent controlling stake in Mitsubishi Motors.

Suzuki Motor Corporation was the first Japanese automaker to come forward after Japan’s Transport Ministry encouraged other automakers to analyze and report whether they had discrepancies in their fuel efficiency data. On May 18, 2016, Suzuki announced that it had used improper testing methods when determining the fuel efficiency of over 10 models that it sells in Japan.

However, Suzuki said it did not intend to mislead consumers. Suzuki’s engineers cut corners and extrapolated their data, which violated regulations, but did not falsify their results with a high degree of error. Additionally, Suzuki said that it does not need to correct its fuel efficiency data.

At the end of its full-year 2015 fiscal year on March 31, 2016, Suzuki had cash and cash equivalents of over $4 billion, and therefore, the company is in a similar situation as Mitsubishi. Suzuki may face some financial hardship, but should be able to withstand any fines that may be incurred.

How These Scandals Affect the Industry

With automakers stepping forward and announcing their wrong doings, it may cause a capitulation in the Japanese automotive manufacturing industry. Other automakers may come forward and issue statements regarding fuel efficiency testing data, which could send the industry down significantly.

Now, the scandal is not all bad news for Mitsubishi. Nissan Motor Corporation is planning to take a stake in Mitsubishi, which could potentially generate substantial synergies between both companies’ technology. Additionally, this alliance could help to rebrand Mitsubishi and drive its sales higher. Toyota Motor Corporation recently increased its stake in Daihatsu Motor Co., Ltd. to 100 percent, from 51 percent, and the company announced that it is intending to form alliances with other automakers. With these companies combining their technologies together, the alliances may cause other automakers to synergize to remain competitive in the Japanese market.