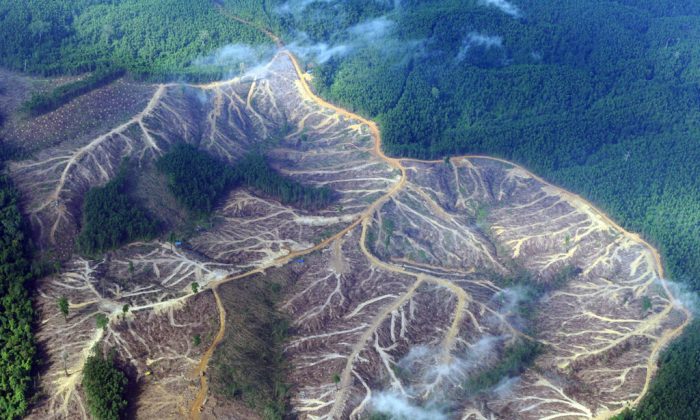 Rainforests are cleared and the land stripped of nutrients through burning in an attempt to grab some of the biofuel economy.
Opinion

Is Biofuel the Answer?

The U.K. Energy Research Centre claimed (2009) that oil production was likely to peak before 2030 and possibly as early as 2020. We are facing a time when oil becomes increasingly expensive as resources dry up. Scientists in Kuwait predicted in 2010 (the latest prediction) that world conventional crude oil production will peak in 2014; this year and almost a decade earlier than some other predictions. Their study is in ACS’ Energy & Fuels.

More than 40,000 oil fields are scattered around the globe, on land and offshore. The largest are the Burgan Field in Kuwait and the Ghawar Field in Saudi Arabia. Each has more than 60 billion barrels yet to be harvested. That sounds like a lot but we are now facing a time of falling production and increasing consumption.

Surprisingly, major new discoveries will only delay the peak by a matter of days or weeks. Simply maintaining global production at today’s level would need the equivalent of a new Saudi Arabia every three years.

Is biofuel the answer?

The world is now in a race to develop energy sources that are seen as “green” because they are renewable and produce less greenhouse gases that lead to global warming. Research published in 2010 by Michal Moore of the School of Public Policy at the University of Calgary and Sarah M. Jordaan at Harvard University in the Department of Earth and Planetary Sciences, looks at the basic question of whether biofuel energy sources are ethical.

They show that the greenhouse gas benefits of biofuel are overstated by many policymakers. Oil palms are an example where land clearing and harvesting actually produces more green house gases than are saved. Environmental groups like Greenpeace claim that the destruction of native forest and peat soils for plantations produces more carbon dioxide than palm oil saves (four percent of global greenhouse gas emissions and eight percent of all global emissions caused annually by burning fossil fuels).

Drs Moore and Jordaan argue that there are four questions that need to be considered before encouraging and supporting the production of more biofuel.

1. What is the effect of biofuel production on food costs, especially for poor populations?
2. Should more land be used for biofuel when the return of energy per acre is low? Are there better uses for that land?
3. In addition to worrying about the impact of global warming, should we not consider the impact on land of massively expanding biofuel production?
4. What are the other economic impacts of large scale production of biofuel?

“Policymakers, especially in the U.S., have been in a rush to expand biofuel protection,” says Michal Moore. “But they need to start thinking outside of the box of climate change and the corn lobby.”

“If policy is designed to create better outcomes for everyone, then we need to subject policy to ethical tests. In many respects, current policy around biofuels fails those tests.”

Here in Malaysia, huge tracts of rainforest are being cleared to plant oil palms. The hope is to produce much needed fuel and to cash in on the ‘new economy’ as energy production moves away from the Middle East. But at what cost?