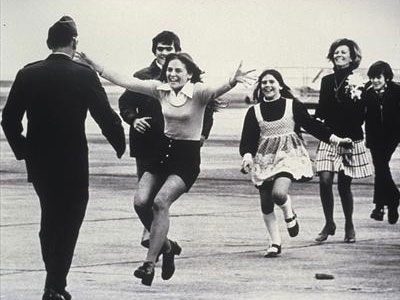 With Bowe Bergdahl’s release, I’ve thought of conversations on a park bench in Washington DC just a few steps from the hootch where Rolling Thunder sold POW memorabilia to raise funds to support the POW-MIA issue.

I had been in Washington just a few weeks when I met a man who would become a friend. He and I would often enjoy the fading summer days talking on the steps of the Lincoln Memorial, a bench around the Reflecting Pool or coffee at Starbucks.

He was a member of Rolling Thunder and a soldier from the Vietnam War. He was convinced that Americans had been left behind in 1973 when Nixon proudly proclaimed all the prisoners had been released.

To try to understand what all this means, a trip in time is required. Back to the beginning of it all in 1972 when negotiators met with Vietnamese officials to try to settle the score.

In late 1972 and early 1973, an agreement was reached between the US and North Vietnam where half of the 1400 US POWs being detained by North Vietnam would be set free once America started to withdraw its troops. The first soldiers held captive were sent out of Hanoi during Operation Homecoming. The Nixon administration and Hanoi agreed that the remaining POWs would be set free when a ransom of $4 billion was paid in the form of war reparations. It was a tactic that worked for the Vietnamese when the French pulled out.

When Watergate came crashing down on Nixon, he reneged on the agreement and the remaining POWs were stranded in Vietnam. Each US president following Nixon had their own reasons for failing to do anything to bring the POWs home.

Carter believed that Americans wanted to put Vietnam behind them and move on. He was also caught up in his own bungled captive issue, the Iranian hostage crisis.

When Reagan took over the White House, he tried to get the POWs back, but his advisors talked him out of it. According to the advisors, the problem was down in El Salvador. The fragile US backed puppet-regime was threatened with being overthrown by Russia and Cuba. Nicaragua wasn’t far behind. Reagan followed his advisors guidance and thought it was necessary to overlook the POWs in order to focus the military’s efforts regarding the dire South American situation.

When the 80s faded into the 90s, re-connecting with Vietnam became a top priority of Washington. George H.W. Bush worked to maintain the coverup that hundreds of POWs were being held. Bill Clinton eliminated all sanctions and embargoes in 1992. That same year, satellite photos over Vietnam showed an airman-specific four-digit code which proved, all but conclusively, that US airmen who had been shot down were still alive — and calling for help.

The Defense Intelligence Agency (DIA) along with the Clinton administration worked to close investigations in each of the cases. John Kerry and John McCain worked tirelessly to discredit documentation, intelligence reports and satellite photos.

The average age of an American soldier in Vietnam was nineteen. Today, the ones still alive, are wisps of the men they once were. Their memories of friends and family have faded and they are left with black-and-white images from a time when Johnson was in the White House and hippies and mini-skirts still roamed American streets. They’ve spent the years in captivity. Living under some of the harshest conditions thinkable, never fully comprehending how, or why, the US government has disregarded them.

They have been beaten, underfed and overworked. They are stuck in a 20th century world that no longer exists. They continue to signal for help. No one comes.

It’s doubtful that the people responsible for this atrocity will ever change direction or even be held accountable for their actions. The American government has left the men behind to die in cages — broken, old and tired.

There are just two of us left to try to change things. I’m going to do what I can do. What about you?