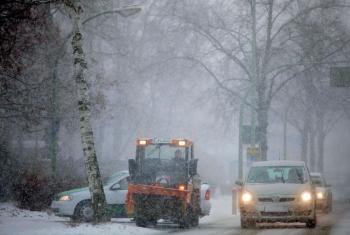 Cars and a snow remover crawl through a thick snowfall in Zehlendorf district. Arctic temperatures and heavy snow have caused numerous deaths and brought public transit to a halt across Europe. (Sean Gallup/Getty Images)
Europe

In the Channel Tunnel between France and England, five trains got stuck on Friday night due to freezing conditions. More than 2,000 people on board had to wait for up to 16 hours to reach their destination. The company operating the train line canceled service for a third day Monday due to an investigation of the incident, with no guarantees that trains will resume Tuesday.

The worst statistic came from Poland, where local media reported that at least 19 people were killed by the cold weather, and more than 10 were poisoned by carbon monoxide from gas heaters.

In the Czech Republic, nine people were reportedly frozen in the extremely frigid weather during the weekend. Mostly homeless people and late night drinkers suffered from the unexpectedly severe frost when temperatures reached record lows in several cities.

Meteorologists in Germany measured the temperatures as low as minus 27.4 degrees Fahrenheit Saturday night, and one homeless man was found, reportedly frozen to death.

Two Austrians also died due to the arctic-like temperatures when they were not able to get home after a night out.

In 1997, Russia had a bitterly cold winter where the temperatures went below minus 18.4 Fahrenhet. Last week, saw similar temperatures and one man was reportedly found frozen in Moscow, becoming the 19th victim of the exceptionally frosty weather in the Russian capital.

European airports canceled flights, and the three main Belgian airports, were closed completely. Numerous European trains have been delayed or canceled, and roads have been gridlocked due to heavy snow.