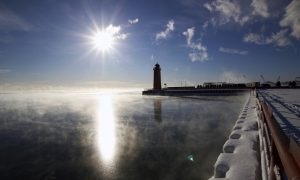 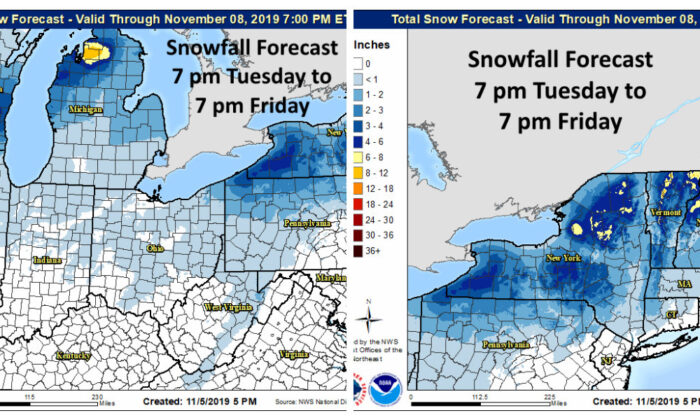 A winter-like mass of cold air is going to inundate the Midwest and Northeast regions of the United States, bringing measurable snowfall totals, according to forecasters. (NWS Twitter)
US News

A winter-like mass of cold air is going to inundate the Midwest and Northeast regions of the United States Thursday night, bringing measurable snowfall totals, according to forecasters.

Parts of the Northeast will see the first measurable snow of the season Thursday into Friday. While most areas will be warm enough for precipitation to start as rain, colder air will be moving into the region late Thu & Thu night, casing the rain to mix with & change to snow. pic.twitter.com/xzBVofQtVW

Just in: At 1.8°F below avg, #October 2019 was the coolest October for the U.S. since 2009, per @NOAANCEIclimate https://t.co/ByWYQIa1aG #StateOfClimate pic.twitter.com/d5tUReQYZk

Overall, “A cold-weather regime will impact the Eastern two-thirds of the U.S. the rest of this week through much of next week with below normal temperatures. The first of two strong cold fronts will pass through this extensive area over the next two days to start the cold wave, while producing heavy snow from the Great Lakes to northern New England and heavy rain from Texas to the Lower Mississippi Valley,” warned the NWS on the front page of its website.

Fox News’ meteorologists said that as many as four inches of snow could fall in Michigan and Wisconsin. Snow already began to fall in Green Bay, Wisconsin, with the Packers sharing Lambeau Field covered in snow.

With the exception of Saturday, the temps we’ll experience through next week will be more typical of December & January than November… #mnwx #wiwx pic.twitter.com/OkS8JkAVxS

“So this is our first storm system but I have to tell you, we have major cold air coming in Saturday, Sunday, Monday, Tuesday, and that will be a setup for measurable snow perhaps next week along the I-95 corridor,” Fox News meteorologist Janice Dean said in the report. “You have been warned.”

According to the Fox report, the forecasted air mass might bring temperatures to Minnesota that could break records set in November 1986.

Winter Weather Advisories…they don’t grab the headlines like massive snow or ice storms, but they are often just as dangerous. And here’s why:

-Businesses and schools stay open
-The roads “don’t seem that bad”
-The volume and speed of traffic remain high.#PurpleProblems pic.twitter.com/Qnrvm1NMBg

Winter doesn’t officially start until Dec. 21. Some forecasters, including the Farmers’ Almanac and Old Farmer’s Almanac, have said that the upcoming 2019-2020 winter is forecast to be a snowy one.

“In the U.S., this winter will be remembered for strong storms bringing a steady roofbeat of heavy rain and sleet, not to mention piles of snow. The 2020 Old Farmer’s Almanac is calling for frequent snow events—from flurries to no fewer than seven big snowstorms from coast to coast, including two in April for the Intermountain region west of the Rockies,” it wrote on its website.

The 2019-2020 season, according to forecasters, will be another “wild ride” with heavy snow across much of the country, and they described it as a “polar coaster.”