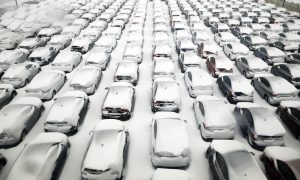 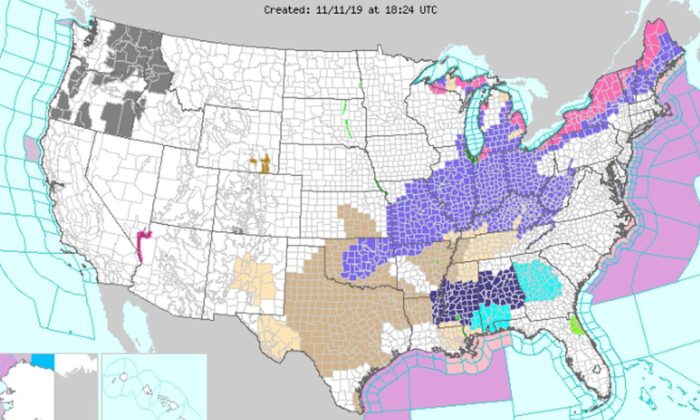 More than 300 records across the United States for November are forecast to be broken this week as an artic wave of air descends over much of the country. (National Weather Service)
US News

Arctic Blast to Affect Much of US, Could Break Hundreds of Records This Week

More than 300 records across the United States are forecast to be broken as an arctic wave of air descends over much of the country this week.

Data from the National Weather Service shows that at least 300 records for temperatures could be set or tied from Monday until Wednesday, CNN reported.

Here’s a look at the current temperatures as of 8:30 am EST. The cold front currently stretches from the Southern Plains to the Northeast. As of 7:00 am EST Malta, Montana was the nation’s cold spot at -24°F. pic.twitter.com/G3xXCQGfDt

What’s more, the Weather Service has issued winter weather advisories, winter storm warnings, and other hazardous weather outlooks for much of the East Coast and Midwest.

“Arctic air will bring snow, freezing rain, gusty winds, and some of the coldest temperatures of the season east of the Rockies early this week. Heavy snow with potential for freezing rain will be possible for a wide swath of New York. Lake effect snow will produce heavy snow downwind of the Great Lakes. Warm temperatures continue in the West along with air quality issues in the interior Northwest,” said the agency on its website.

Updated snowfall and ice accumulation forecast. The snowfall forecast is through 7 am Thursday, so it includes some lake effect snow behind the storm Tuesday night and Wednesday. pic.twitter.com/mqOosMkHeE

Poor weather conditions have already begun to affect the Midwest, leading to the cancelation of more than 500 flights, the Weather Channel reported.

At O’Hare Airport in Chicago, an American Airlines plane slid off the runway after landing, CBS Chicago reported. There were no injuries.

“More than 70 million people could see accumulating snow from Colorado to Maine,” CNN also reported, adding that “winter warnings or advisories stretch from the Midwest to New England.” Other than Chicago, snow was reported in Milwaukee, Kansas City, and Detroit.

Check out this loop of forecast weather conditions through Wednesday. The arctic front is expected to dive well into Mexico and to move through Florida. Wintry conditions, gusty winds, and much colder temperatures will impact the eastern 2/3rds of the U.S.. https://t.co/7KRlDKlDGz

According to AccuWeather, “Motorists across portions of Interstates 65, 69, 70, 71, 75, 80, 87 and 90 should exercise caution as snow falls. A heavier burst of snow, combined with the waning daylight, could reduce visibility.”

AccuWeather’s forecast map also showed that temperatures in Upstate New York and New England could drop to about 0 degrees when wind chills are factored in.