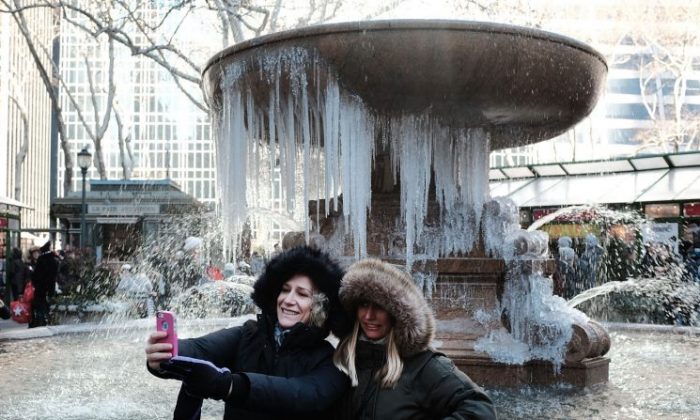 Two women take a selfie photo in front of a frozen fountain in Bryant Park on a frigid day in Manhattan in New York City on Dec. 27, 2017. Dangerously low temperatures and wind chills the central and eastern United States are making outdoor activity difficult for many Americans. Little relief from the below normal temperatures is expected the first week of the New Year. (Photo by Spencer Platt/Getty Images)
US News

Arctic Blast Across US Cold Enough to Freeze Dogs to Death, Bring Snow to Florida

Dangerously cold weather gripped half of the United States on Thursday and Friday, prompting hypothermia and frostbite warnings as temperatures are forecast to remain near record lows through New Year’s weekend.

The arctic blast has already claimed the life of one dog, which was found frozen on a porch in Ohio, according to the Toledo Blade.

“I don’t know how long she was out there,” Megan Brown, a Humane Society cruelty investigator, told the Blade. “She was frozen solid.”

Meanwhile, a staffer at Mount Washington Observatory demonstrated the power of hurricane-force winds combined with brutal cold by pouring a kettle of boiling water into the wind. The water instantly turned into snow.

The cold snap scared away even the hardiest freezing weather enthusiasts, with a polar bear plunge being canceled in New Jersey, Fox News reported.

The combination of moisture and cold air could bring snow as far as some parts of Florida on Thursday morning next week, according to Shay Ryan and Greg Dee, meteorologists with WFTS in Tampa, Fla.

The chance of seeing snow in Florida is still a longshot, according to Dee, but would be possible if the freezing temperatures reached south and met with precipitation over Florida.

Ryan forecast the chance of a few flurries at 10 percent while both meteorologists noted that the model can change as time goes by.

“But it is completely possible!” the meteorologists wrote. “Tampa has seen snow before, the last time it snowed in the Bay Area was on January 19, 1977.”

At the very least, Florida will experience very cold weather next week.

FLORIDA SNOW | It's a long shot but next Thur AM moisture and cold air may produce #snow showers or flurries near #Tampa. #flwx #florida https://t.co/uMVB16NZN6 pic.twitter.com/xzSQpIrW3p

A cold front bearing down on the Pacific Northwest was expected to dump as much as 3 feet of snow from Friday morning in parts of Washington state and the northern Rocky Mountains, the National Weather Service said.

The weather is set to test the mettle of hundreds of thousands in New York’s Times Square as they ring in the New Year on Sunday night. Forecasters said the temperature is likely to dip under 10 degrees Fahrenheit, well below the typical average low for the day.

In Times Square, thousands were bundled up for a chill that hit the city. “It’s really cold but I love it. My fingers feel like they’re going to break but it’s OK,” said Tashena Eason, 28, a registered nurse from Miami, Florida.

For a time, the hashtag #ItSoCold was the top trending U.S. topic on Twitter on Thursday.

Meanwhile, Tioga, North Dakota, about 200 miles north of Bismarck, was one of the coldest spots in the continental United States on Thursday at minus 15 F early on Thursday afternoon.

For most of the region encompassing New England, northern Pennsylvania, and New York, the National Weather Service issued wind chill advisories or warnings as temperatures were expected to be below 10 degrees F in a wide area.

For upstate New York, east of Lake Ontario, the NWS warned of “dangerously” cold wind chills of minus 5 F to minus 30 F through Friday.

Erie, a city of about 100,000 on the shores of Lake Erie in northwest Pennsylvania, was expecting a fresh round of winter storms that could bring as much as an additional 10 inches of “lake effect” snow, forecasters said. The area is already buried under more than 65 inches from a record-breaking storm earlier this week.

At Erie’s UPMC Hamot hospital – the only trauma center in the area – employees used their own four-wheel-drive vehicles to ferry snowbound workers to the hospital to ensure it could continue to operate. Some employees stayed overnight to avoid getting stranded, Jim Donnelly, the hospital’s chief nursing officer, said on Thursday.