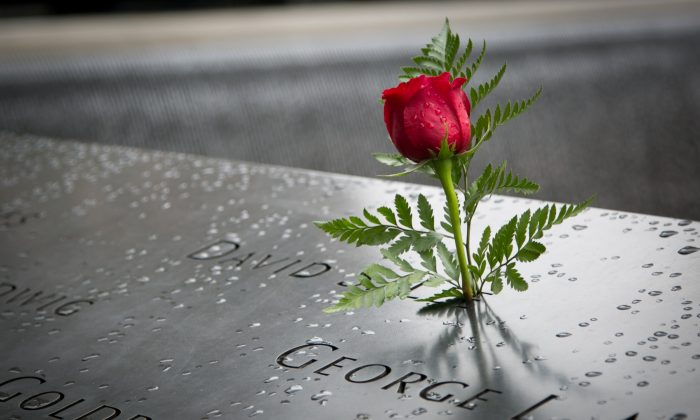 A rose is placed on the name David S. Lee at the 9/11 Memorial on Sept. 9, 2014, who died at the site of the World Trade Center in New York City. (Samira Bouaou/Epoch Times)
US

In 2011, prior to the public opening of the World Trade Center Memorial, memorial designer Michael Arad shared about his inspiration and intentions for the project. It’s worth taking a moment to reflect on those thoughts once again.

There is not going to be a single way in which people respond to the memorial. What I wanted to do was to be very clear about the absence that was suffered that day and its persistence. The time does not erase and heal all wounds, but changes how we feel about them.

And it brings the loss of that day into every day, not in a way that incapacitates us, but in a way that we say, this is part of who we are and how we move forward.

I actually started to think about a memorial a few months after the attack. And I had this very inexplicable vision, this idea in my head of the surface of a river torn open, and these two square holes forming at the surface of the river; and water spilling in these voids.

And it really didn’t make any sense to me. Water doesn’t behave that way. But I was very intrigued by this idea. And I spent several months exploring this, sketching it, building models. Eventually, I built a small fountain that captured the sense of the surface of the water torn open by these two voids, and water spilling into these square voids; and these voids never fill up, always remain empty, despite the passage of time, despite the water flowing into it.

And I built this little model. And I photographed it on the roof of my apartment building, with the skylines of the city, and the absence of towers in the skyline being reflected in these two voids in the surface of the river.

A year later, there was the competition for the design of the master plan. And I wanted to know if that idea could be investigated further, changed in some ways by bringing it here to the site, instead of being on the river, where you could never go in. Being right here, where the towers once stood.

So out of that came the idea of these two square voids, which are where the towers once stood. And when you walk around these voids, and encounter the names of the dead, you are doing it within the towers’ footprints. And you’re seeing the scale of the towers as well; and you are seeing the multitudes of names, which surround each void, the close to 1,500 names around each pool.

Places like Union Square and Washington Square, these public places are places that knit us together as a society. They are not just places that only bring us physically together in one space. They brings us emotionally; they connect us with one another.

And they played such an important role in helping us heal after 9/11, and helping us come to an understanding of that day.

I want people to be able to have a moment of quiet contemplation, of thoughtful interaction, to let that inner dialog take place, that conversation we might have with ourselves that we often postpone, we don’t have, because we’re busy, because we’re running on to the next thing.

At a place like this, I think you can set aside the day-to-day life. You can forget the city for a moment in all of its noises and sites, and focus on the names which are in front of you. And focus on your relationship to the history of that day, and to the present, and what you might do about it.